THE SUMMER I DIED: Book Review

Where to begin with this book? Well, first of all I can say I don’t think I’ve read anything like it before. I read a lot of horror, and have done so all my life and I can safely say I don’t think a book has made me feel sick before. This piece of fiction is beyond the usual genre writing, beyond splatter fiction. This was not the typical slasher story I was expecting. I’ll get back to that shortly, first the setup.

Roger, whose first person perspective the story is told from, returns from a semester at college to reunite with his high school best friend, Tooth. They begin spending a summer of drinking and having a good time. This all changes when they hear a woman’s cries while out on a remote mountainside shooting at cans, and they feel compelled to investigate. After investigating the cries, they stumble across a cabin and fall into the clutches of a demented character referred to as the Skinny Man. What follows is page after page of brutal, sadistic violence, that you could never be prepared for.

When it comes to the characterisation in the book, the interactions between Roger and his best friend Tooth are really well done. Their relationship evoked memories that we all have of that one best friend in high school who you remain friends with throughout life, even if you don’t talk as much as you should. That friend that you have an unbreakable bond with, and you know how each other think. The establishment of this believable and tight relationship fosters empathy with them, and that makes what follows so much worse.

The vast majority of the book takes place in Skinny Man’s basement as our protagonists are subjected to greater and more disturbing torture. If the horror movie genre has the torture porn sub-genre, then this is the literary equivalent. I don’t want to give the impression that the writing is bad, gimmicky or just stringing together torture scenes for shock value, because it’s not, and that what makes it more disturbing. The writing is good, emotive, and the characters have depth. You feel for them so much, especially as things get worse, and everything considered sacred is desecrated by violence. About two thirds of the way through the book I questioned whether I wanted to carry on, every subsequent visit of the skinny man to the basement takes things to another level. I wanted to stop, to put the story out of my mind, forget it, but I couldn’t. I needed to know what happens. In so many books the heroes find themselves in a rough spot, but I don’t think I’ve seen people as completely fucked, and in such a hopeless situation as in this book. I had to know things got better, that there would be some justice and retribution; it couldn’t be left like this, so I carried on. 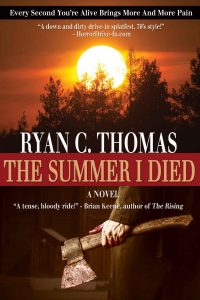 The ending is fitting for the tone of the rest of the book. So many bad things had gone on that a happy ending was never really on the cards. To say that justice was done would be a bit much, but the Skinny Man does have his reign of terror ended, but after all that preceded, it’s a hollow victory.

I’ve realised that despite being a veteran of horror fiction, you can’t unread something. This book is disturbing beyond question, the Skinny Man is sadistic, evil and merciless. The suffering and punishment are unreal in their scale but all too real in their descriptions. This book will leave a mark on you, you will think about it when you’re not reading it, and this is not a tale you will forget. I thought I couldn’t be shocked any more, that my senses were deadened to horror from years of dedicated genre reading, but I was wrong. It’s hard to give this book a score because the writing is really good, but the torture is so abhorrent.