Submerged In The Dark Below Official Poster 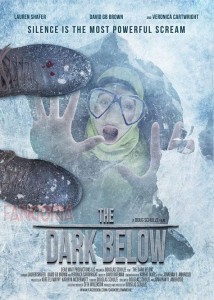 Douglas Schulze (Mimesis: Night of the Living Dead) delves into the darkest corners of horror with his latest film The Dark Below, and we’ve got the first official poster, which really paints the frozen scene.

This unique film focuses on the terrifying constraints of being trapped underneath a frozen lake whilst being chased, and the production crew actually filmed all the scenes on and under a real frozen over lake. Filming in temperatures that dropped to minus 20 degrees, Schulze said: “There’s no green screen here; we filmed this almost entirely in real locations with real elements.

The Dark Below will receive its premiere showing at this year’s Fantasia International Film Festival in Montreal starting July 14th until August 4th.

Synopsis:
When a group of divers become trapped underneath an iced-over lake, whilst being hunted by a vicious killer, they have to endure the elements, confined space and severe dread in order to find a way to stay alive.