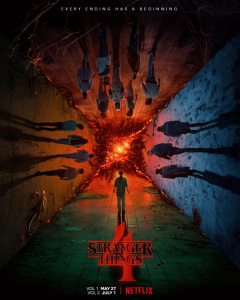 We’ve been waiting with bated breath to hear when Stranger Things’ highly anticipated fourth season will arrive, and now we’ve got not one but two release dates to share with you!

Said to be twice the length of previous seasons, Season 4 will be split up into two parts, with Volume 1 debuting on Netflix on May 27th, 2022. Once you’ve binged those episodes, you won’t have to wait too long for the next batch, because Volume 2 will drop on July 1st.

In the fourth season of Stranger Things, the still-alive Hopper is imprisoned far from home in the snowy wasteland of Kamchatka, where he will face dangers both human…and other. Meanwhile, back in the states, a new horror is beginning to surface, something long buried, something that connects everything….

In other news, Netflix has officially ordered a fifth season of the series, which will be the last. However, the show’s creators, the Duffer Brothers, have teased that, “There are still many more exciting stories to tell within the world of Stranger Things; new mysteries, new adventures, new unexpected heroes.”