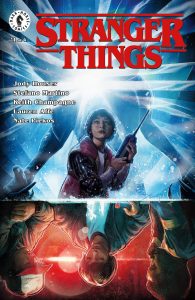 Netflix’s Stranger Things has blown up in ways no one thought possible. Responsible for launching new careers and reigniting old ones, this tale of monstrous nostalgia has become a cultural phenomenon that has surpassed everyone expectations of what a show about kids could do. So of course the big question everyone is asking is: what’s next for the little series-that-could? An eight bit video game or a D&D inspired board game? Perhaps an Eggo promotion with Elle’s face on the waffles? Well, you’re close. It’s a comic!

That’s right boys and girls, Stranger Things has found an illustrated home courtesy of Dark Horse comics that will explore the expanded world of Hawkins, Indiana. This announcement comes on the heels of a confirmed video game (sadly not of the 8-bit variety) from Telltale games as well as a two Stranger Things companion books coming out this fall and an original Stranger Things novel about Elle’s mother Terry due next spring (the books will not be handled by Dark Horse). If you’ve been itching for more small-town weirdness between seasons, it seems you won’t have to wait too long. But back to the comic!

The comic will be handled by writer Jody Houser (Orphan Black, Mother Panic) and illustrator Stephano Martino (Doctor Who, Angel) and will the tell story of Will Byers and how he survived in the Upside Down during his absence in Season 1. The four-issue series will be the beginning of a series of comics and young adult graphic novels that will expand the world of Hawkins and its inhabitants. The official press release states:

“Stranger Things #1 (of 4-issues) follows Will Byers as he enters a dimension of decay and destruction where he must use his wits and resolve to dodge the pursuit of the Demogorgon and escape the Upside Down. Stranger Things #1 features a cover by artist Aleksi Briclot (New Avengers, Maskemane) with three variant covers from Rafael Albuquerque (American Vampire, Blue Beetle), visual artist Kyle Lambert, and a photo-variant cover designed by Patrick Satterfield and Netflix.” 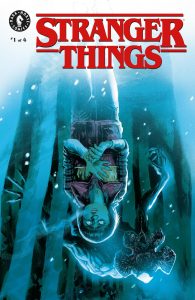 The press release also hints at a new Dark Horse publishing program that is handling the Stranger Things comic rights. Perhaps we will see more Netflix/Dark Horse comic work in the future? This reviewer wouldn’t be surprised to see a Black Mirror comic book or a Bojack Horseman adaption, but that’s just wild speculation. After all, stranger things have happened.

Stranger Things #1 will be available September 26, 2018 and is currently available for pre-order from your friendly, neighbourhood comic books store.