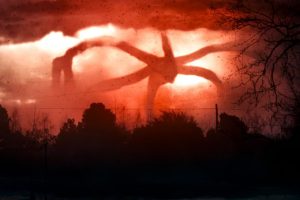 Well, considering it clocks in at just half a minute, the Superbowl Strangers Things 2 TV spot didn’t disappoint. Kicking off with a retro TV ad clip, the teaser takes us through the kind of familiarly Amblinesque imagery that characterised the show’s hit first season.

We see the kids riding their bikes and Gaten Matarazzo’s Dustin in a Ghostbusters uniform for the Halloween episode (oh, man), before things take a turn for the Close Encounters, with what looks suspiciously like a gigantic alien visitor.

Season 2 takes place in 1984, one year after the events of the first season and Will’s return. For a while, everything seems back to normal, but something lurks below the surface, threatening the whole town of Hawkins. Returning cast members Finn Wolfhard, Millie Bobby Brown, Gaten Matarazzo, Caleb McLaughlin, Winona Ryder, David Harbour, Natalia Dyer and Charlie Heaton will be joined by a host of new faces including The Goonies’ Sean Astin, comedian and actor Paul Reiser (Aliens, The Darkness), Brett Gelman (30 Minutes or Less), newcomer Linnea Berthelsen, Safe Neighborhood’s Dacre Montgomery and Sadie Sink (TV’s Odyssey).

Stranger Things returns to Netflix in time for Halloween.