Steve Alten’s The Loch to be a Feature Film 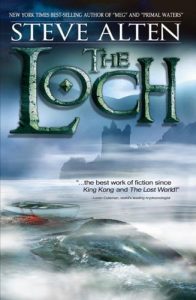 In a recent interview, author Steve Alten confirmed that his novel The Loch is on the way to becoming a feature film. Although you may not recognise Alten’s name at first, you should be interested to learn that he is the author of Meg; the upcoming shark thriller with Jason Statham and Ruby Rose.

The Loch sounds like another intense creature feature, and follows a marine biologist as he tries to uncover the truth of a previous incident that saw him almost drown in the infamous Loch Ness. The film is obviously in early days for now, but when speaking about it’s production Alten said:
“[…] Screenwriter and director are their first priorities… and they are speaking to some serious talent.”

If Meg is a sure-fire hit, then we’re sure that there’s going to be a long queue of film-makers looking to bring this new horror film to the big screen. Who would you like to see in the director’s chair for this one?