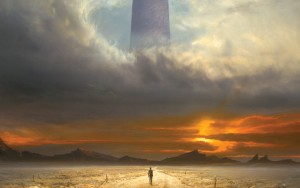 The Dark Tower has had a turbulent journey to the screen, with various writers and directors coming and going, but it’s now confirmed: the highly anticipated adaptation of Stephen King’s epic series has finally entered production.

With Mad Max: Fury Road’s Abbey Lee now officially attached to play Tirana, more casting news will hopefully follow soon. Lee joins Idris Elba as ‘The Gunslinger’ Roland Deschain, and Matthew McConaughey as the demonic Man in Black, in what is possibly the greatest piece of casting this year.

Twitter became an excitable place to be yesterday, following Stephen King’s tweeting of:
It’s official: The man in black fled across the desert and the gunslinger followed.

Soon after, Idris Elba tweeted his co-star this gem:
@McConaughey you have one new follower.

To which McConaughey replied:
@idriselba come and get me, I look forward to it.

A tentative release date for The Dark Tower has been set for January 13th, 2017. In order to tackle the scale of the Dark Tower books, MRC are developing a TV series, scheduled to arrive at a similar date.