Stephen King’s Novella Throttle to get a Film Adaptation

While everyone is getting excited about the upcoming release of Andy Muschietti’s film adaptation of Stephen King’s It, A Bigger Boat Productions is moving forward with another of King’s stories co-written by King’s son Joe Hill, titled Throttle. 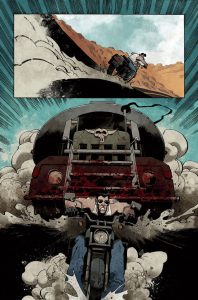 John Scott III (3 on IMDb) has been hired to write the script and he most recently wrote Henry Hobson’s zombie-drama Maggie. As Throttle is another story about a close-knit relationship, it makes sense that Scott III has been hired considering his reflective and thoughtful approach to the father-daughter relationship in Maggie. As with Maggie’s undead happenings occurring in the background, Throttle’s main story follows a revenge-driven trucker so there is a thrilling outer layer to this story, too.

Throttle was published in 2009 and had a comic book adaptation in 2012 by IDW Publishing. Keep your eyes peeled for Throttle’s release date.