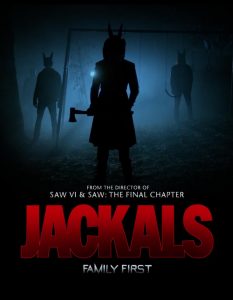 The Blade actor – who will be taking on Leatherface in next year’s Texas Chainsaw Massacre prequel – will star in the film alongside horror remake regular Johnathon Schaech (Prom Night, Quarantine, the upcoming Day of the Dead), Silent Hill’s Deborah Kara Unger, True Blood’s Chelsea Ricketts and Nick Roux.

Previously known as Sacrilege, the film originally had Saw II-IV/Abattoir director Darren Lynn Bousman at the helm. He even directed a market trailer for it back in 2013. Since then, the project has moved into the hands of another Saw series alumnus, Kevin Greutert, who directed Saw VI and Saw 3D: The Final Chapter.

Jackals sees an estranged family hire a cult deprogrammer (Dorff) to retrieve their teenage son from the clutches of a murderous cult. They soon find themselves under siege however, when the cult members surround their cabin, demanding the boy back.

Greutert (pictured above on the set of his 2014 chiller Jessabelle), directs from a script by feature first-timer Jared Rivet.