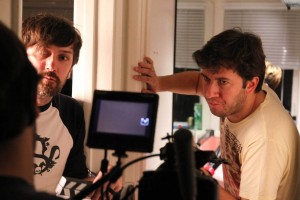 2014’s Starry Eyes is one of the finest and most intelligent horror films of recent years. Good news then, that Kevin Kolsch and Dennis Widmyer, the directing duo responsible for the vicious Hollywood satire are all set to begin working on their next feature. They are currently in final negotiations to rewrite and direct a sequel to Andres Muschetti’s hit 2013 spooky kids chiller Mama.

Starring Jessica Chastain and Nikolaj Coster-Waldau, the original Mama tells the tale of two orphaned girls who, after living in a cabin in the woods for years, are taken in by their Aunt and Uncle. They claim to have been raised by “Mama”, and whoever or whatever the entity is, is seems to still be with them. The film received a wide release and became a runaway hit, grossing nearly $150,000,000 worldwide, on a budget of around $20,000,000. Its success was no doubt due in no small part to the involvement of genre stalwart Guillermo del Toro, who executive produced, and whose name was splashed across the marketing campaign. Del Toro does not appear to be involved in the new film, which is produced by Scott Bernstein and Russell Ackerman, the latter of whom produced short docs for Mama’s disc extras.

Kolsch and Widmyer have most recently finished directing a segment for upcoming horror anthology Holidays, alongside directors including Nicholas McCarthy (The Pact), Adam Egypt Mortimer (Some Kind of Hate) and Kevin Smith, continuing his new weirdo-horror direction. The duo are also attached to direct Exorcism Diaries for Lionsgate’s Summit imprint, which will hopefully be better than its annoyingly generic title.