As the slasher film became increasingly popular throughout the 80s, many directors incorporated elements of the genre into their own work. Soavi’s Stage Fright, released in 1987, is a perfect blend of the Italian giallo and the American slasher, with the victims being picked off, one by one, in a remarkably Argento-esque fashion. It comes as no surprise to learn that Soavi worked as an assistant to Dario Argento, and Stage Fright wears this influence heavily. But despite the paper-thin plot and terrible acting, Stage Fright is a great example of how style can triumph over substance, with Soavi’s direction escalating the film into something far greater than the sum of its parts. 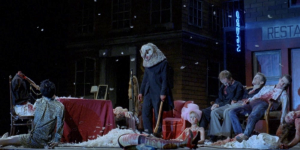 A few nights before the opening of a new ‘intellectual musical’ opens to the public, the cast are locked inside the theatre after a rehearsal. But unbeknownst to them, an actor-turned serial killer, Irving Wallace, has escaped from the local insane asylum and taken refuge inside the theatre, intent on killing them all before the morning.

While the premise is interesting enough, it should be said that Stage Fright is utterly ridiculous. The film opens with a prostitute being strangled on a street corner. We only realise it’s part of the play when the ‘killer’ leaps out into a grand jeté, while a woman dressed as Marilyn Monroe performs a gnarly saxophone solo. But the fact that the play is quite obviously dreadful is all part of the fun. The wardrobe mistress is more than deserving of an axe to the face for designing such hideous costumes.
The real star of the show is Irving Wallace himself (Clain Parker). The owl mask, which is laughably bad in the play, becomes terrifying when the real killer emerges, and Soavi treats us to many close-ups of his shadowed eyes beneath the feathers. Though Wallace has no dialogue in the film, he is as cold and unfeeling as he is tragic. This is emphasised in Simon Boswell’s fantastic score, with eerie washes of synths adding a poignant quality to the otherwise inscrutable killer.

But Michele Soavi’s directorial flair is what really saves the film from being another generic slasher, with unique set pieces and camera angles used throughout. The iconic moment at the climax of the film – when Wallace arranges his victims on stage – is beautifully shot, with feathers slowly blown into the air like snow. There are some interesting questions here about death as a mode of performance, and as Wallace appears to look directly into the camera, he seems to be questioning our desire to deem violence as entertainment. This is soon brushed off in favour of a more conventional ending, but it would have been nice for Eastman’s script to address this, particularly as the play’s director Peter (David Brandon) has some questionable moral values when it comes to selling tickets for the performance. When the wardrobe mistress is found dead outside the theatre, Peter uses the murder as a form of promotion, and he clearly cares little about whether the cast live or die – just as long as the play is a success. 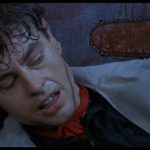 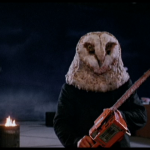 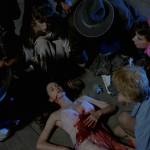 But despite all of this, Stage Fright is a lot of fun to watch, mainly because the over-the-top acting and dire script are pretty laughable throughout. But, from a stylistic point of view, Stage Fright is as powerful and atmospheric as any other slasher film to come out of the 1980s. With an otherworldly score and some fantastic camera work, the film has been unfairly forgotten, with Soavi’s direction elevating the film into a world of grotesque, shocking beauty. Though never quite reaching the dizzying heights of Argento’s best work, Stage Fright – with its dreamy score and owl-headed killer – is still, undeniably, a real hoot.