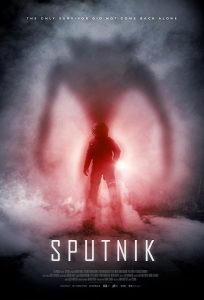 Synopsis:
In 1983, Tatyana (Oksana Akinshina), a neuropsychologist known for her unorthodox methods, is summoned to a remote facility to examine Soviet cosmonaut Konstantin (Pyotr Fyodorov), whose capsule crash-landed. But as Tatyana soon discovers, Konstantin didn’t return from space alone—and the officials overseeing the facility are less concerned with helping him than they are about harnessing the powerful thing inside of him…

The feature film debut of Russian director Egor Abramenko, Sputnik is a patchwork quilt of ideas stitched together from other alien movies. We’ve seen creatures hiding inside human hosts, and we’ve seen shady officials attempting to weaponise extraterrestrial forces for political clout. The creature itself looks like it slithered right off the set of Stranger Things—itself a mishmash of genre tropes—replete with all the chittering and screeching we’ve come to expect from modern movie aliens.

But Sputnik’s focus isn’t on its alien, which becomes clear very early into the nearly two-hour runtime when the film shows us exactly what has taken up residence in Konstantin’s oesophagus. Instead, Oleg Malovichko and Andrei Zolotarev’s script plunges its hero Tatyana into a world where no character can be taken at their word and ulterior motives and dark secrets run rampant, and this is where the true tension lies. There’s Semiradov (Fedor Bondarchuk), the high-ranking official who summoned Tatyana, whose facade of concern hides an icy interior. Even the seemingly amnesiac Konstantin, ostensibly a victim in all this, may know more than he is letting on.

Tatyana’s unflinching resolve and sharp observations make her an engrossing character to follow as she navigates this backdrop of bureaucracy and lies. Unfortunately, many of the film’s core themes and ideas feel either underdeveloped or over-explained. Take the emphasis on heroism, both in terms of what it truly means to be a hero and how authorities use the concept for their own ends. The script doesn’t seem to quite trust that the audience is picking up what it’s putting down and winds up hammering us over the head with its messages as a result. Meanwhile, other plot elements, like Tatyana’s backstory, are handled in blink-and-you’ll-miss-them fashion.

Tonally, the film is largely consistent, allowing viewers to sink into this bleak grey world, with moments of jarring dissonance. The main settings, for example, feel suitably grim and authoritarian, but a few unnecessary scenes set in an orphanage detract from the oppressive atmosphere Abramenko has established. The film’s score is similarly incongruous, occasionally assaulting us with bombastic notes that might have been plucked from a generic action movie, rather than a smart, slow-burn sci-fi chiller.

That slow-burn will itch at some audience, and Sputnik certainly feels every minute of its 113-minute runtime, with long, meditative stretches between the bloody creature attacks. If you’re looking for a fast-paced alien attack movie, this is not it. But as an intriguing character study and genre-infused drama, it certainly succeeds.