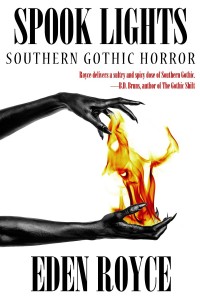 Spook Lights by Eden Royce is a collection of 12 Southern Gothic horror stories, now these aren’t cringe inducing, gore infested ball breaking horror. More a slow burning quiet horror that creeps up on you and instead of burying an axe in the back of your head, gently breaths on the back of your neck while you absorb each story. Waiting for the realization that somethings amiss, bringing feelings of unease and softly tweaking your emotions.

Like any collection of so many short stories, there’s the ones you remember vividly, ones that fade into obscurity and even the odd one that you skip through. So I’ll mention a couple of the ones I liked.

The Watered Soul is the story of a man’s search for the woman who cursed him all those years ago, to the edge of the Charleston marsh and an old fish shack amidst the biting flies, the oppressive heat and the stealthy gators avoiding the handbag brigade. Lucious was cursed for eternity, a difficult burden to live with and he wants out.

In Rhythm, David attempts to summon spirit goddess Ezili Danto for guidance and a little thing called revenge. And The Choking Kind sees Grace attend the burial of her Father, she is drawn to the grave of her Mother, who everyone says is dead but is she really.

Spook Lights captures the atmosphere of the South perfectly, the heat, the characters and something else, black magic, witchery and sorcery. It did feel maybe a little too easy though, as if conjuring something otherworldly was as difficult as a walk in the park. One of those collections that didn’t quite maintain the good work throughout.