Split is one of the biggest horror films of the year and has acted as further evidence to prove that M. Night Shyamalan is having an epic comeback to the genre. The film is certainly not without its flaws and I would argue that its examination of “victimhood” is problematic. However, on a surface level, Split is ferociously entertaining and features one of the most surprising feature endings for a decade.

Split is coming to DVD and Blu-ray on 18th April and will be out to rent or purchase on Digital HD before this, on 4th April. If you’re keen to get your hands on Split, then you’ll be glad to know that there are a host of impressive features going hand-in-hand with the DVD and Blu-ray. They are as follows: 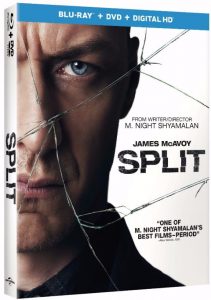 * Alternate Ending
* Deleted Scenes
* The Making of Split– Filmmakers, cast, and crew discuss what attracted them to the project and how they were able to bring such a unique premise to life.
* The Many Faces of James McAvoy- A look at how James McAvoy approached the challenge of playing so many different identities.
* The Filmmaker’s Eye: M. Night Shyamalan – Director and writer M. Night Shyamalan has a singular, big-picture vision of his projects. Producers, cast, and crew discuss how Night’s process gives them the freedom to execute their roles to the fullest.
* We particularly excited to see what alternate ending Shyamalan has cooked up and how it compares to the bizarre – and possibly brilliant – ending from the theatrical cut.

Be sure to grab Split this April.