A gleefully offensive and splatter-heavy ode to 80s greats The Evil Dead, Return of the Living Dead and Night of the Creeps, Jonathan Straiton’s Night of Something Strange is now available to buy on iTunes, Amazon, Vudu, GooglePlay and Vimeo on Demand, and is available to pre-order on blu-ray from distributor Hurrican Bridge Entertainment’s official website (www.nossmoviestore.com). 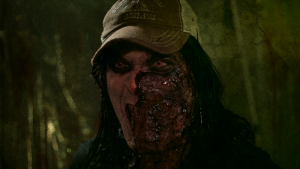 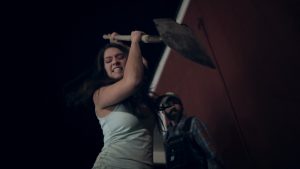 With the film featuring as it does a sexually transmitted zombie virus, demon genitalia, fang-filled orifices and blood-filled condoms, it predictably went down a storm at this year’s festivals, including the Phoenix Film Festival in April where it had its world premiere and won Best Horror Feature Film. It went on to screen at a number of genre fests including Frightfest, NYC Horror, TromaDance, HorrorHound, Scare-A-Con, Freak Show and Puerto Rico Fear Fest. 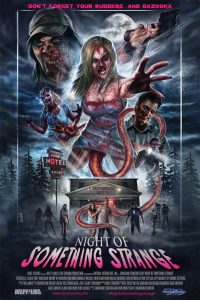 Five teenage friends set out for the beach on their Spring Break vacation. Good times are cut short when one of the group, Carrie, contracts a deadly sexual transmitted disease during a bathroom stop. When they stop for the night at an isolated motel, the real terror begins when the STD virus starts running rampant, turning those infected into the living dead. However, there’s more going on at the motel than meets the eye.

Check out the film’s trailer; while it gives you an idea of what to expect, it really is barely the tip of the iceberg.