In 1995, Malik and his husband Aaron (Ari Cohen), along with Aaron’s daughter from a previous marriage, Kayla (Jennifer Laporte), move to a small town chasing a better quality of life. But small towns can sometimes breed small minds, and the couple’s arrival is quickly met with thoughtless racism (Malik, who is mixed race, is mistaken for Aaron’s gardener) and a homophobic attack on their home. For Malik, still struggling to cope with trauma from his past, this attack is emotionally devastating. But even as Aaron assures him that most of the neighbours are fundamentally good and welcoming, Malik becomes convinced that they have evil intentions—and that Kayla may be in danger.

Spiral does an excellent job of recreating a time period that feels almost alien now in terms of its technology, yet disturbingly familiar in its attitudes toward queer people. The homophobia that Malik and Aaron experience is not a thing of the past—yet as the film points out, hate never really goes away. It just shifts its focus.

Offsetting this hatred is an affecting and realistic portrayal of a queer relationship. Cohen gives a grounded performance as Aaron, a man who finally seems comfortable in his skin and naïvely optimistic that the world will be comfortable with him. Malik, meanwhile, for all his defiant talk about being loud and proud, is fundamentally frightened—and with good reason. It’s a depiction that will hit uncomfortably close to home for a lot of queer viewers, and the nuances of Bowyer-Chapman’s performance elevate the material above the somewhat-pretentious leanings of the script.

For all its nuance and subtlety, the film isn’t lacking in straight-up creepy weirdness, culminating in a shocking final reel. But it struggles to remain coherent as things start to spiral (fittingly) out of control. There are a lot of twists and turns along the way, and while the audience is sometimes a step ahead of Malik, there are a few moments where we’re left scrambling to keep up. Some of the more overt supernatural elements are also a little silly, only serving to lessen the impact of the film’s big final scare. 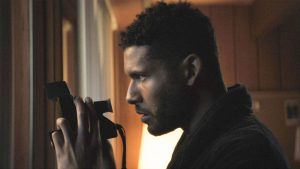 Spiral is being called the Get Out of queer horror, and while it isn’t quite as successful in what it’s trying to do, it’s still an uncomfortable and interesting watch. Check it out for the arresting lead performance by Bowyer-Chapman, but don’t expect it to win any Oscars.