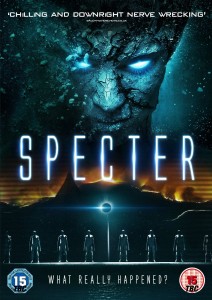 Synopsis:
The town of Midground is threatened by a tsunami caused by a massive earthquake in the North Pacific Ocean. After other explainable events transpire, Chase Lombardi and friends are forced to discover whether they are experiencing a natural phenomenon or something else all together.

Films like the Blair Witch Project and Paranormal Activity have a lot to answer for because Specter is yet another one that has been spawned out of the found footage genre.

I still remain bemused as to why people insist on continuing to make these kind of films, because they are fraught with issues which even the most experienced of filmmakers find difficult to overcome. Yes we have seen some perfect examples, but for the most part I find that there is very little appeal to these kinds of films and there are a lots of people out there who have grown quite bored of them.

Specter is interesting in premise as it offers a good combination of horror, Sci-Fi and thriller. Plus entwined within the film we are presented with footage of authentic life natural disasters, which definitely provides a sense of realism.

The first 30 minutes are full of promise and there is clarity of picture, which is not overly disorientating or distracting. The actors appeared very relaxed and were believable in their roles. However, the complications within any found footage soon begin to become apparant.

I found that the story cannot be fully told due to the numerous restrictions of any film of this type, like poor editing choices, the obligatory black outs, fuzzy screens, ridiculous battery warning signals and stupid decisions made by characters who insist on filming everything.

There is definitely a slow, slow burner feel with very few frights and scares along the way. I can see how the director aimed to try and heighten the tension and feeling of dread, which in some parts worked quite nicely.

But in saying that, in others I found it to be quite predictable, as it follows the same rules and formula as those have preceded it.

I feel that Specter would have been a far more impressive movie if it hadn’t concentrated on being a solely found footage film. If it had included more conventional filming methods then it would have allowed the film to open up and become more accessible as a viewer.

If you are a fan of this type of film then it is definitely worth a watch but if you are more like me and groan every time someone mentions the word ‘found footage’, then I don’t believe that you are truly missing out on a master piece.