As an expectant father, Richard is naturally a bit nervous and seeing his wife, Holly, change as the pregnancy develops is a strange experience. What’s most alarming is that what is happening to her doesn’t seem right. Is it his imagination or does she not seem to be acting like she used to?

His wife is reading a book about the Essex Witch, a woman who enchanted and cursed and convinced a virgin to bear a devil’s child. Holly’s changes become more frequent and she suddenly has a mysterious midwife who tends to her when he’s not there. It seems like history is being repeated.

Curran uses really good imagery around how Richard sees his wife, with lots of insect and slimy words, comparing her to a spider with an egg sack and the fetus to a parasite. There are some truly vile descriptions throughout which is one of the author’s fortes. There are some especially leg crossing moments for male readers. Smell is another key sense used to set the scene for readers. Holly not only acts differently but she smells differently when she is not herself. The whole atmosphere of the bedroom where she rests changes. 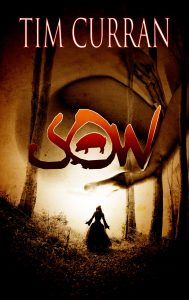 Holly’s changes are mirrored in Richard, as the burden wears on him, exhausted and losing his mind. It was a pleasant change to see a protagonist use technology to help his cause rather than pretending it doesn’t exist in a horror story. However there is the sense of overwhelming powerlessness in the face of what is happening.

As Holly declines, Richard’s desperation continues. We find out that they visited an abandoned farmhouse with dark traditions where Holly was chosen for an evil purpose. The dark heart of the farmhouse is in a piggery. We learn about the vile origins of the sow. The story builds to a powerful conclusion as ancient rituals beg to be fulfilled and a broken Richard is the only one who can stop it.