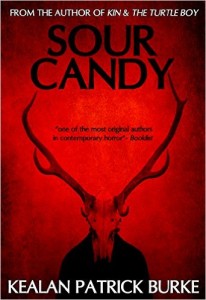 Phil Pendleton was more than willing to pay a visit to Wal-Mart to restock on chocolate sex rewards, the memory of Lori in pink silk undies (with leather paddle and ball gag, fun times) and hot shagging fresh in his mind. When the kid screamed like a banshee and shattered his love lust euphoria.

An unsettling scream queen style screech from a boy no less and something strange is about to take place. A mind fuck of phantasmagoric and inexplicable proportion starts in the Sour Candy section. This isn’t the last time Phil will see this young boy but he’ll wish it was, with every ounce of his soul.

Next up Phil is involved in a car accident and the driver of the other car, yep it’s the boy’s Mother.

‘Marsh studied him as one might a particularly exotic species of insect. “I’m asking you all of this, Mr. Pendleton, because when the officers went to your house, the child you just described seeing with Mrs. Bennings is the one who opened the door.”

A true Woah! WTF moment and Phil, well Phil’s life is suddenly changed and me, I’m tripping. Kealan Patrick Burke never disappoints and just to reassure you, there is definitely no horror of the ball gag variety, Sour Candy is one of the best psychical horror novellas I’ve read this year.