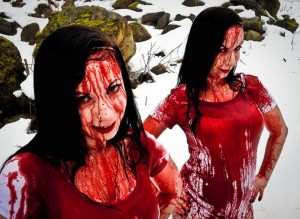 Jen and Sylvia Soska, fresh from their annual Blood Drive for Women in Horror Month, are attached to direct a feature remake, while a TV series is also in the works. The dual-project is the result of a joint venture between John Vidette’s Somerville House Releasing and producers Paul Lalonde and Michael Walker (Left Behind).

“The work of David Cronenberg is legendary and Rabid is much more than just a horror movie,” the Soskas said. “The real message of his film is powerful, and even more pivotal as we look at the world around us today. It’s an honor to be involved in this love letter to his original, which we handle with the same respect as Paul Schrader’s Cat People, Alexandre Aja’s The Hills Have Eyes and John Carpenter’s The Thing.” One could, of course, add Cronenberg’s own The Fly remake to that list.

While it’s no real surprise that the remake juggernaut has turned its attentions to Cronenberg’s early work, this one definitely seems like something more than the kind of brazen money-spinner that has kept Hollywood in the horror game this last decade. Plus, it’s nice that things are being kept Canadian; Toronto-born Cronenberg shot Rabid in Montreal, while the Soskas (hailing from British Colombia) will be shooting the new vision in their homeland this summer.