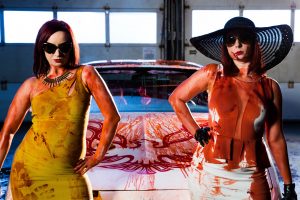 Speaking to the Horror Channel recently, those twin troublemakers Jen and Sylvia Soska (pictured right) opened up about their remake of David Cronenberg’s Rabid, which was announced early last year, but about which we’ve heard little since.

“We are very honoured to have been the team chosen to take on the remake of Cronenberg’s Rabid,” Sylvia enthused. “Normally, I’m not a huge fan of remakes but that’s if they don’t have anything new to bring to the story. We have a unique perspective just because of who we are to tell the story from Rose’s eyes as well as make a commentary on the increasingly rabid world that we live in.

“Also, we’ve been dying to get back into body horror. Ten years into David’s filmmaking career, he remade The Fly and it brought him to this new level. This is ten years into our career and this will be our first film that gets a wide theatrical release, so it feels like a good pairing. We just have to make sure we don’t let down our country, our fanbase, and our hero,” she said, adding, “No pressure.”

When the project was first announced over a year ago, a TV series based on Cronenberg’s classic was reported as also being in the works, although we’ve since heard nothing new on that.

The Horror Channel interview came ahead of the UK TV premiere of the Soskas’ See No Evil 2, which is this Friday, April 7th, at 10.50pm.