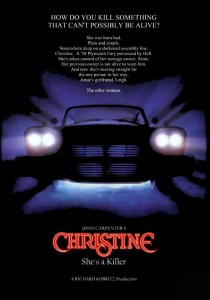 American fans of the hell-possessed car can rejoice, as John Carpenter’s adaptation of Stephen’s King’s Christine is to get a blu-ray release from Sony. The previous release from Twilight Films in 2013 was limited to only 3,000 copies and, unexpectedly, sold out. If you venture on to Amazon, you can see that this copy is selling for around $80. Luckily, there is no longer a need to fork out this insane amount, unless you can’t wait until this new blu-ray is released, of course.

Christine was one of the first horror films I saw as a child and I found it genuinely quite terrifying. Hopefully those of us in the UK will get a shiny new blu-ray copy soon. Sigh.

Synopsis:
John Carpenter brings Stephen King’s best-selling novel to life in this chilling thriller. She was born in Detroit … on an automobile assembly line. But she is no ordinary automobile. Deep within her chassis lives an unholy presence. She is CHRISTINE – a red and white 1958 Plymouth Fury whose unique standard equipment includes an evil, indestructible vengeance that will destroy anyone in her way. She seduces 17-year-old Arnie Cunningham (Keith Gordon), who becomes consumed with passion for her sleek, rounded chrome-laden body. She demands his complete and unquestioned devotion and when outsiders seek to interfere, they become the victims of Christine’s horrifying wrath.

Sony’s blu-ray of Christine will be released on 29th September 2015, keep an eye out for news on any special features.