SON OF A BITCH: Book Review

Demitrius breeds dogs – dangerous dogs for dangerous people. These are not yappy little dogs or show dogs. What the people use the dogs for after they are sold is of no interest to him. His problems start when he gets a pang of conscience after hearing that a dog he sold to a Cuban family, Sheba, is being used in some kind of demonic ritual. He arrives at the scene just as the priest has finished having his way with the dog in front of his fellow acolytes. He brings the dog back after rescuing her at gunpoint. Then things get bad.

The book begins with Sheba being torn open from the inside by the dog/human/baboon looking demon hybrid that has gestated following the rape of the dog. It is a brutal and graphic opening and very much sets the tone for the rest of the story.

Demitrius is unsure what to do with the vicious and blood thirsty dog. Then we meet Warlock, a gang land assassin who regularly uses his dogs for jobs. He agrees to rent the dog to Warlock. After a string of gangland hits, Warlock ends up on the wrong side of the dog demon who eats his heart and Warlock finds himself possessing the body of the dog hybrid.

The rest of the bloody ride of a story is Demetrius and Warlock in his new form trying to find a new body, so that the Cuban grandmother who wields the black magic power can transfer him into it before it’s too late. As time goes by, the demon consciousness takes greater control, which could leave Warlock trapped inside forever.

The plot is pretty straightforward after this point with Warlock on the run from the police and trying to meet up with the others for the ritual. There is a lot of gore and swearing on the way. This all builds to a climactic stand off at a battered women’s home. 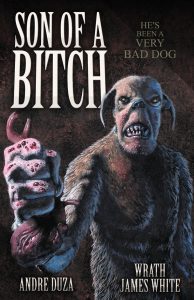 Overall it’s a quick read you can probably get through in a sitting or so, at about 100 pages. It’s an interesting premise, a bizarre concept, and a good ride, but don’t expect too much depth. The focus is more on the action and kills rather than any particular scares. All the characters are pretty loathsome and nasty pieces of work so you don’t feel for any of them and their fates, apart from Demitrius a little. The way the story concludes made me smile, and it was a great ending. It’s a fun story but you won’t be thinking about it after you’ve finished. A final note – one thing I’ve noticed about pretty much all Deadite Press books is that they have stellar book covers.