Synopsis:
Leigh Michaels is a twenty nine year old TV director who moves to LA to start a new job, only to find herself harassed by a prowler. After receiving frightening phone calls, Leigh becomes stalked by the local predator who sends her ominous gifts, rewires her electrics so the lights short out, bugs her phone and spies on her through a telescope from the opposite tower block. Soon Leigh realises that she needs to confront the stalker herself before he claims her life. 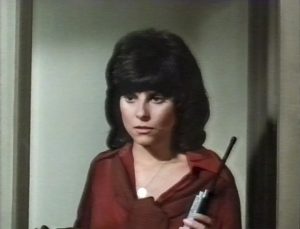 Disregarding latter day blunders like; The Ward, Ghosts of Mars and Village of the Damned (1995), a few of John Carpenter’s lesser known movies are just as compelling as the more revered classics, but, for some reason, some still remain unreleased on DVD and Blu-ray in the UK. In recent years, Carpenter has focused more on recording new music and touring with his band but, during his amateur film-making days, the legendary director helmed many vibrantly titled shorts such as: Revenge of the Colossal Beasts, Gorgon the Space Monster and Gorgo Versus Godzilla.

Now creating music “for the movies in your head”, Carpenter last year performed new material live, alongside classic scores from films such as: Halloween, Assault on Precinct 13 and Escape From New York, amongst others. During his recent tour, Carpenter invited fans (via social media) to dress up as characters from his films at the concerts yet many would still yearn to see obscurer cult classics like In The Mouth of Madness and Memoirs of an Invisible Man released on disc in the UK. Even more sought after than the aforementioned, is Carpenter’s third film, Someone’s Watching Me! This feature length TV movie from 1978 never received a VHS release, let alone made an appearance on UK DVD/ Blu-ray, but was discovered by some ardent followers (including myself) nestled in the crevices of terrestrial British TV schedules throughout the 1980s and 90s.

Carpenter was a screenwriter for hire when Warner Bros asked him to pen Someone’s Watching Me! in 1977, shortly after he completed Assault on Precinct 13 (his second feature). Originally titled High Rise, the story was based on a real life event which occurred in Chicago, but Warner Bros found Carpenter’s script to be “too soft”, so turned it over to their TV department before hiring him to direct it. Carpenter had only previously helmed Dark Star and Assault on Precinct 13 at this point in his career, and had never worked on a union show before. After casting Lauren Hutton in the lead and future wife Adrienne Barbeau as her co-worker/ friend, the film was shot in ten days, mostly on Warner Bros sets, while exteriors were filmed of two facing high-rises near a beach in Santa Monica.

Someone’s Watching Me! eventually aired on NBC in November 1978. Today it seems like a ersatz slap of Hitchcockian trash, but remains hugely enjoyable thanks to a punchy plot, strong female characters and performances which elevate it above similar sub-genre schlock of the time. Films like: Are You in the House Alone?, Stranger in our House and Last House on the Left, which were more gratuitous and exploitative or, in most cases, downright derivative. But Someone’s Watching Me! had the gift of skilled direction, a great cast and diverse characters. Protagonist Leigh Michaels is a complex and engaging protagonist, surviving under duress following a relationship break-up, in a plot which sees her bud from heartbroken and delicate into a proto-Laurie Strode.

In many ways, Someone’s Watching Me! is a featherweight precursor to Carpenter’s Halloween, the darker, Shatner faced slasher classic which Carpenter started work on just two weeks after completing SWM! Both films feature strong female leads battling psychotic male antagonists and the director confesses to adopting the flow and style of Someone’s Watching Me! for the follow-up.

The director relayed in the deleted Region 1 DVD extras, how he learnt to properly pace himself on the set of Someone’s Watching Me!, to ensure he accomplished all of the tasks he had to, to get the film finished on time. The suspense simmers nicely with well woven set-pieces and hackneyed panache, yet Hutton remains oddly collected throughout most of the film’s duration, until physical contact with the villain is made in the second act. In response to her new boyfriend’s suggestion to move out of her apartment, Michaels refuses then replies to his request to call the police with: “What do I say? Somebody’s sending me presents and wants to take me on a six month vacation, make them stop?” 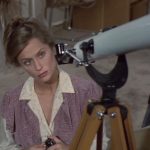 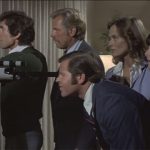 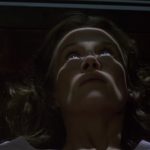 Both the protagonist’s mantra and Hutton’s performance are adorning yet diminish the shock factor slightly during the film’s latter half suspense scenes, which Carpenter eventually learnt to hone and execute with finesse in Halloween. Carpenter always had a knack for crafting dogged, defective and determined characters and Leigh Michaels is no exception, but she is one of his few female protagonists. Leigh forms a platonic friendship with her co-worker Sophie (played by Carpenter’s future wife Adrienne Barbeau) and meets a potential new love interest, in a bar scene that sees her jokingly confessing a fear of bring raped by dwarves as an ice breaker.

These relationships provide a brawny backdrop to the central story until she is forced to attend to the stalker when his meddling increases and terror flourishes. Other than seeming distracted by talking to herself and lying to men for fun, she is a character that admits to doing so and acknowledges her flaws, revealing great inner strength and conflict. Despite being initially presented as a victim with a fear of falling in love, Michaels ripens to overpower the antagonist in a finale which sees Hutton perform her own stunts (hanging out of a high-rise window, much to Carpenter’s discomfort).

Someone’s Watching Me!is far from a Carpenter classic but it remains entertaining throughout and oddly resounds more like a Brian De Palma thriller, considering the his habit of ripping off Hitchcock around the time it was made, with films like: Dressed To Kill, Blow Out and Obsession. SWM! is nothing like any film Carpenter had ever made before or has done since (bar Halloween in ways) but it is not without its flaws. The director confessed to fluffing a dolly back/ zoom in shot, lifted from Hitchcock’s Marnie, which Spielberg more famously went on to utilise in Jaws, while a stripped down Saul Bass-like opening credits sequence and tawdry stock thriller score by Harry Sukman, contribute to the faux Hitchcockian tenor along with the creepy stalker opening/ surveillance sequences and gravel voiced antagonist who lends a minor Giallo tint. There are slight elements of SWM! that feel similar to They Live which surface throughout the surveillance references in the story. “That’s why we insulate our lives with locks,” one character states. “We change our phone numbers, guard our space with television cameras and guns. He’s trying to hurt you without touching you.” 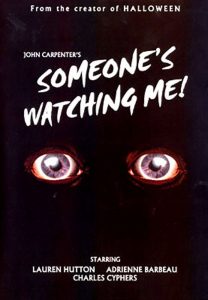 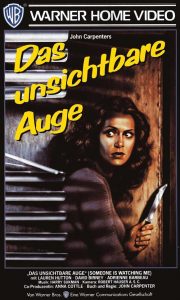 Carpenter once said that 1977 was the hardest he had ever worked, having also filmed Halloween and Elvis (another TV movie and his first with Kurt Russell, which he claimed “broke his balls”) in the same year. Today, he feels that Someone’s Watching Me!wouldn’t work as well because “everyone is a voyeur”, but ultimately he is proud of his low-fi TV feature. While there are still no signs of a UK DVD or Blu-ray release, fans of the horror master and films of this ilk, who have never seen the film before deserve to have a chance, because Someone’s Watching Me! is worth seeking out.