SOME KIND OF CU*T: Book Review 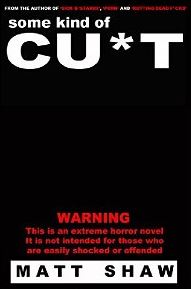 Some Kind of Cu*t from Matt Shaw’s black cover extreme horror series is a seriously troubling and sickening story, it was just too much, crossed to many boundaries that I feel strongly about and in the world of shocking stories. This one exploded way off the scale.

A Family, maybe Cult serves better, starts with a member initiation, one that involves a hammer and someone’s skull. A new member of the Family is born and murder was his right of passage.

Then back 36 years to a man released from prison, reclaiming his nephew who was sold for a case of booze by his alcoholic sister and young Tom has a new home, all be it for a very small time. Just until Uncle Chris loses his temper and then he’s off again. This time to a children’s home and this is where my problems started. Young Tom is abused and the detail Matt Shaw describes is absolutely sickening, I really don’t want to read this sort of stuff, for me it’s just wrong. It’s bad enough to know this sort of thing goes on but to read about the specifics of the acts themselves, no thanks.

So these two stories of past and present come together in a finale that truth be told lacked any real twist, just death I guess but in all honesty, I really didn’t care. I can’t recommend this it delves to deeply into places you really don’t want to go, hence the low rating.