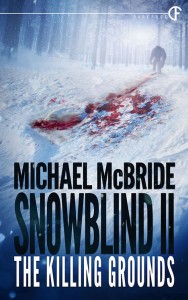 Michael McBride takes us back to the Rockies and once more we’re blind in the snow, we’re in the killing grounds, the panic is mounting and the tensiometer is pinging like a metal detector in a shipping container.

Seven years ago John Avery’s girlfriend went on a skiing trip with friends, none of them were ever seen again and he’s searched for them, relentlessly, he was even a suspect.

Sheriff Wayne Dayton once shot a man who staggered into a diner carrying a severed head, a tortuous ending to a harrowing journey that is not easily forgotten. A conservation biologist searching for a missing bighorn sheep finds a video camera hidden in a tree and evidence of the missing party is finally discovered.

‘A scream from the television cut him off. It was loud and clear and filled with so much raw terror that the hackles rose along his shoulders and neck.’

Sheriff Dayton investigates, resulting in a group setting out to ascertain exactly what happened all those years ago. Darkness and a freak blizzard put them in the killing grounds of a predator even Arnie would struggle to get away from.

There’s a cabin hidden in the snow and the trees, on a wall inside is scrawled the names of those unfortunate enough to realise that there’s definitely no hiding place, not here. And a warning ‘They come at night’.

Snowblind II: The Killing Grounds is another exemplary suspense filled horror from McB, in a perfect setting for terror, the pace and trepidation rise exponentially until it’s just unbearable. Will there be any survivors in the most extreme of conditions and if there are, can the U.S. law department take them out (kill them that is, not for lunch). Well worth finding out and I do recommend the two Snowblind novellas, heavy on terror, light on humour and there’s a good deal of pronounced nail-biting and heart pounding tension going down.