An annual hunting trip for four best friends quickly turns into a desperate fight for survival. Someone or something is stalking them. After one of the four gets injured, they seek refuge in a decrepit cabin, where things go from bad to worse. That’s essentially the setup, and the story throws us immediately into the action.

The first thing to note is that the setting is wonderful. The cold is palpable in the author’s descriptive prose. The intense blizzard adds to the isolation of the characters, disorienting them, immediately covering tracks and making navigation both slow, and, due to the amount of snow to walk through, energy sapping. They are lost, trapped with no cell phones, and nobody is coming to help. 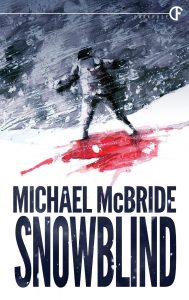 One by one, they are picked off by an unseen enemy who is always watching. The story pulls no punches when it comes to gore. There is some brutal action, with lots of gristle and viscera. The violence is realistic and graphic, which really gives it an extra punch. The author effectively conveys the feeling of panic the men suffer. The hunters of the men are slowly revealed, but you don’t get a full description until the closing stages of the book.

The enemy turns out not to be human. While it was an interesting direction, I think I would have preferred them to be mountain people cannibal types. That would have made the previous toying with the men more sadistic and the story darker. You can’t really fault creatures, however fantastical, for their nature. So, where the realism had been jarring and incredibly effective earlier, it’s a little lost at the end. This is a small quibble though. I really enjoyed Snowblind and I’m looking forward to reading more by Michael McBride.