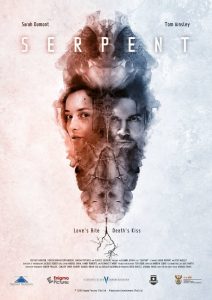 The first poster has arrived for claustrophobic suspense thriller Serpent, which was recently picked up for North American physical and digital distribution by Sony Pictures Home Entertainment.

The film, which is due to premiere at the Los Angeles Film Festival, follows a husband and wife as they embark on a romantic camping trip out in the wild. The getaway quickly turns deadly however, when they find themselves trapped in their tent with a poisonous snake. The heightened situation leads to marital tensions and confessions, building to the uncovering of an awful truth.

Scouts Guide to the Zombie Apocalypse’s Sarah Dumont and Tom Ainsley (TV’s The Royals) star in Serpent, which was written and directed by feature first-timer Amanda Evans. The film will be screened at the Cannes Market by Voltage Pictures, who is handling international distribution in territories outside of North America.