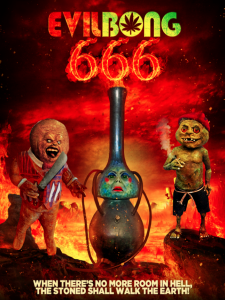 Legendary low-budget horror maestro Charles Band’s Full Moon Features clearly has no intention to put its leading, long-running franchises to bed anytime soon. While the Puppet Master series has both an eleventh (and final) entry and a reboot in the works and Killjoy’s Psycho Circus sees its titular demon clown on his fifth outing, Band’s company’s stoner horror series, Evil Bong continues with Evil Bong 666, which now has this blazin’ poster.

The sixth instalment in the comedy-horror series that began in 2006, Evil Bong 666 is now well into production, and will be launching an Indiegogo campaign this week to finish up its psychedelic SFX. Read on for the official synopsis.

The bong is BACK! Back from Hell, that is! Everyone’s favorite iconic and evil bong, Eebee, returns in the new, hellaciously dark Full Moon fantasy comedy. This time, she’s brought sexy demons, stoner creatures, and a brand new, freakish Full Moon puppet you’ll have to see to believe! When a brutal blood sacrifice opens a portal to Hell, Eebee and The Gingerdead Man are returned to Earth. But his trip to Hell has driven Gingerdead even more insane, and unless someone can stop his murderous cookie-cuttin’ rampage he’s gonna ruin Eebee’s plans for world domination.In a last-minute fit of inspiration Eebee channels her inner Dr. Frankenstein and creates The Gingerweed Man! A tiny, cobbled together monster made from the greatest strains of weed on earth, this little killer is ready to get high with a little help from his friends! 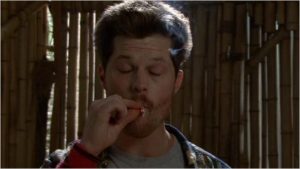 Evil Bong 666 will premiere on the Full Moon Amazon channel and Full Moon Streaming plus other digital platforms on the impeccably-chosen date of April 20th. A trailer has been promised for sometime in the coming weeks. Hopes (and fans) are high.