My first memory of Slugs was as a child at the local video store. I would always gaze in wonderment at the shelves of forbidden horror movies, equally scared and excited by looking at the covers, my imagination running wild wondering what lay within. Seeing the Slugs VHS cover was particularly harrowing. It wasn’t until years later that I actually tracked down the book that the VHS was based on. By all accounts, the movie was fairly poor and could not live up to the book it was based on. There is something about humanity that we harbor an unease about being the dominant species. There is always a primal fear lurking that mother nature will turn on us. If you couple that fear with one of the slimiest and uniformly disliked creatures, you have a winning combination for a nature-run-amok story.

The story follows a health inspector, Mike Brady, who discovers the first victim of the slugs and his subsequent investigation. As the story unfolds, what first appeared to be a crazy theory about the slugs being responsible clearly is proven true. Public encounters with the slugs increase, as do the number of casualties and evidence of slime trails. Mike and his wife, Kim, enlist the help of Don Palmer, a sewage officer, and John Foley, a museum curator, to get to the bottom of the outbreak and find a way to stop them before they spread from their breeding ground in the sewers into the general water supply. 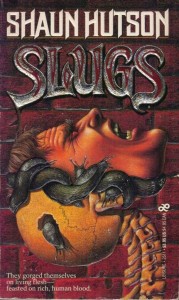 The slugs are an ever-present threat throughout the book. They are silent. You won’t hear them coming. They are small and can slither through small spaces, disgustingly including many human orifices. They are carnivorous and can hide unnoticed in food. Ingesting a slug will, of course, lead to a very unpleasant death. If that is not enough, put them in a large enough quantity in an enclosed area and that is seriously fear inspiring. These are not the type of slugs that a sprinkling of salt or poison will take care of.

This is a very enjoyable read. Slugs is a wildly entertaining book. So much fun! There are so many scenes of the most vomit-inducing grossness. My particular favourite occurs over lunch at a restaurant. After reading this you will never look at a slug or a salad the same way. Shaun Hutson wrote a sequel to this called Breeding Ground that I’d also recommend. It’s more of the same, but in this case that is a good thing.