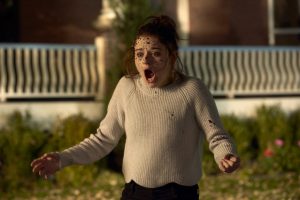 Earlier this month, 22-year-old Julia Goldani Telles (The Affair) became the first cast member announced for Screen Gems’ upcoming Slender Man, which is due to start filming next month. Deadline have now reported that the rest of the lead cast has been rounded out, with The Conjuring‘s Joey King (pictured in Wish Upon), Annalise Basso (Ouija: Origin of Evil, Captain Fantastic), Jaz Sinclair (Paper Towns), Talitha Bateman (Annabelle: Creation) and newcomer Alex Fitzalan all having signed up to battle the faceless entity.

Sony’s genre arm, Screen Gems has been developing a feature film based on the infamous and influential horror meme for a while now, and in January, locked in Sylvain White to direct. While scoring his biggest hit with Jeffrey Dean Morgan/Zoe Saldana actioner The Losers in 2010, White’s earlier career saw him direct 2006 franchise last hurrah I’ll Always Know What You Did Last Summer, before making his theatrical feature debut with 2007 sleeper hit Stomp The Yard.

The Slenderman was already a pretty widespread meme when it was propelled further into the public’s consciousness following the stabbing of a 12-year-old girl by two classmates in Wisconsin in 2014. When quizzed by police, the two girls said that the Slenderman made them do it. The crime provided the focus for HBO’s 2016 doc, Beware the Slenderman.

Bradley Fischer, James Vanderbilt and William Sherak will produce Slender Man under their Mythology Entertainment banner, which originally held the rights to the character.