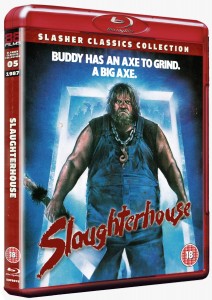 Synopsis:
Old Lester Bacon is struggling to keep up with modern business practice. His manual slaughterhouse once boasted a top class service and produced some of the finest meats. But as a sign of the times, it seems no one wants quality anymore; they want fast, quick, and cheap, they want machines. As a result the family business has to call it quits. With pressure from local businessmen, Lester is being forced to sell up. This is something that pains him greatly, as it does his 300lb mentally disturbed son, Buddy, who has an affinity with the pigs- even to the point of communicating only in squeaks and squeals. When Buddy accidentally hacks up some young people who are poking around the property and tormenting Buddy’s beloved snorting pals, Lester sees there might just be a way to sort out his problems. What with all those wonderful hand groomed slaughtering techniques on offer- from throat slitting to the delicate removal of flesh from bone- it looks like Buddy is going to get a chance to practice after all. The meat hooks provide the perfect storage place too- for all those new little dead piggies- and it would be a shame to let Buddy’s talents with a meat cleaver  go to waste, when the family business might just have a chance after all. That is if they can get rid of these annoying newcomers and their stupid ideas about upgrades and technology.

If you have ever found yourself wondering just what the bastard child of Motel Hell’s Farmer Vincent and TCM’s Leatherface might look like, Rick Roessler’s pig snorting, slash n hack anti-hero “Buddy Bacon”, might just provide that missing link. One time director Roessler, tired of having his scripts rejected by Hollywood, did what many a down on his luck first time director does, and thought he’d make a horror film to show them all they were wrong. The outcome of this was 1987’s slasher fare, Slaughterhouse- an aptly named little ditty that certainly lives up to its no nonsense moniker. The problem, well for Roessler anyway, was the original script started life in 1983 (the ass-end of the Golden era for the slasher), but it would take another  four years for Rosessler’s vision to make it to the screen. The delay meant that when the film was finally released it found itself in a very different landscape to the one it had started life in- the genre was moving on, while Slaughterhouse had its roots firmly in the beginning of the decade. As it was, the film represented something of a montage of ideas and tropes from much stronger cult genre pieces, while attempting to add something different. A bold move for the director and one that sadly failed to pay off at the time; by 1987 the slasher was becoming considered a bit old hat, and even though the sub-genre still persists today in some form or another, at the time Slaughterhouse found itself  competing against a hotbed of innovative big budget effects driven genre pieces; Nightmare on Elm Street Part 3: Dream Warriors, Near Dark, The Lost Boys. It would be fair to say Roessler didn’t make a dent in obtaining notoriety, let alone that big old statement of showing the world. As a result Slaughterhouse hasn’t really left much of an enduring legacy other than a limited theatrical release followed by some, now long out of print, home video releases. But never fear, because if you didn’t catch them first time around, Buddy Bacon and co are back, and this time looking leaner, and meaner than ever before thanks to a shiny new BD release from the UK’s own 88 Films.

Of course now Slaughterhouse has the benefit of nearly 30 years of aging on its side. It can legitimately stand shoulder to shoulder with its peers and take some small ownership in being part of that particular vault in 80’s heyday horror history. By today’s standards the film provides some fairly entertaining slasher mayhem, and benefits from some great performances from Joe B Barton, as Buddy, and his mentalist farming father Lester, played by Don Barrett. Roessler assembles the rest of his unknown cast to line up and be counted as fodder- as a result the pacing is breezy, the headcount high, and the grue free-flowing. What more can you ask for in a slasher, really? Well, some might argue T&A is a must, and on that level Slaughterhouse is likely to disappoint (lacking in the usual boob to gore ratio, having in fact nothing on the nudity front). It also fails to live up to the levels of high camp and shock of the films this obviously takes its lead from- despite director Roessler stating on the interviews contained within this release he was attempting to make “something different”. But, ignore this fact, the mad plot holes, the typical B-grade standard of acting from the supporting cast, and there is actually quite a gruesome little  frolic to be found.

The disc has had a fine restoration for its age and type; presented by 88 Films as part of their ongoing Slasher Classic Collection in 1080p HD on a director approved transfer. The print manages to retain that 80’s charm, yet is presented as clean, nicely defined, and contrasted (especially on a lot of the dark scenes). The oddball 80’s soundtrack also shines through on this new digital media. While the upgrade doesn’t suffer from over scrubbing of unnecessary digital process; leaving all those squelchy gory bits to recover their former cinematic glory thanks to this spanking new release. The package arrives with some valuable extras too- especially given the relative obscurity of the film in question- including that all important, and not to mention new, director’s commentary, and some archive interviews with the cast and crew. There is also some on set footage, TV spots and fun promotional material included in the set and an essay booklet by Calum Waddell. Out now via 88 Films.