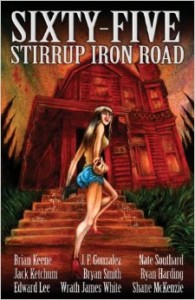 The authors collaborate on chapters to keep the story rolling along maxing out the disturbometer as we go, with the pinnacle scaling the heights of emetophilia or Roman showers, which if you’re still blissfully unaware then you might want to stay that way because well, basically it’s a sexual practice that involves vomiting. Still interested well then golden showers and animals shouldn’t phase you in the slightest and yep that’s also in there.

There is something seriously wrong with that house, its influence fiendish and depraved, a past tainted with sadistic violence and deviant sex of the kinkiest variety. Edward Lee takes the reigns of the prologue and gives us a taste of the house before we jump ten years and Arrianne and Chuck move into the ill-fated abode.

The sex is fantastic, Arrianne is insatiable, permanently aroused and for Chuck life is riding high, her depression now a thing firmly rooted in the past. Even the place he’d only dreamed of was now seemingly open and accepting visitors, you know what I mean but like all good things it doesn’t last forever. There’s funny noises, maybe chipmunks or mice, strange things are happening and their behaviour is now existing on an entirely different plane.

So we have nine of the biggest names in horror fanning the flames of a blood, vomit and moistened appendage soaked ride, with all proceeds benefiting modern master of crime and terror, Tom Piccirilli. The authors even write themselves into the story and if this sounds like your kind of thing them I’m sure you’ll love it, it’s definitely memorable.