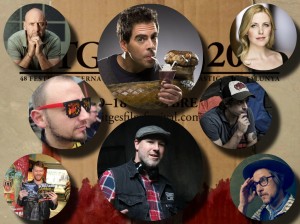 With the 48th Sitges – International Fantastic Film Festival of Catalonia a mere week away, this morning Festival Director Àngel Sala, accompanied by Ferran Mascarell, Minister of Culture for the Catalonian autonomous government’s Generalitat, and Miquel Forns, Mayor of Sitges, introduced the latest additions and developments for this year’s Festival.

Running from the 9th until the 18th of October, this year’s festival promises an authentic banquet of diverse genre film expressions and trends from all corners of the globe. Something regular Sitges attendees can confirm is that the festival consistently serves up a veritable kaleidoscope, bringing together renowned names with long track records in genre and up and coming filmmakers and this year will be no different. The Festival – adding a new cinema and extending the number of screens this year – will also become a rendezvous for the Catalan film industry, providing opportunities for production proposals presented by young filmmakers.

Sitges 2015’s line-up includes some of the most authentic horror from around the world, represented by some of the latest American productions and fantastic genre projects emerging from countries that have firmly established themselves as true genre powerhouses. The festival will be showcasing the latest trends in Asian fantasy genre and the new wave of American B movies, as well as a complete selection of Catalan genre productions. The Festival’s multidisciplinary ethos is topped off with a wide variety of sections that include a painstakingly selected range of documentaries and the best TV shows the goggle box has to offer of late.

In celebration of its 20th anniversary, Sitges 2015 pays tribute to the film Seven, the star of the poster for the 48th edition, the psycho thriller by David Fincher that set a precedent by magnificently combining the crime film genre with horror. To mark the occasion, the Festival has published the book “Seven. Los pecados de David Fincher” (Seven, David Fincher’s Sins), with contributions from various authors and which addresses the influence the film has had on horror and thrillers in recent years.

The Festival’s cinematic indulgence will be rounded out with a wide variety of cultural activities and events, new venues and the debut of a new cinema: the Tramuntana Room. This venue has been added to the other three regular cinemas: the Auditori, the Retiro and the Prado. Said venue – which, up until now, hosted presentations and side events – has been fitted out as a cinema and will play host to a significant number of screenings, as well as some essential master classes. In addition to these four cinemas, the Festival has also included other venues for screenings and events: the Escorxador (hosting, once more, the Brigadoon section, presenting 46 feature length films and 40 shorts), the Hotel Avenida Sofía (hosting two different Serial Sitges sessions, sponsored by FNAC), Maricel Palace (presenting a Game of Thrones special), the Movistar+ Zone (a free venue down at La Fragata Square with various screenings over the opening weekend of the Festival) and Hort de Can Falç (which, for the third year in a row, will be having free, al fresco screenings on both weekends).

An open door to industry and universities:
This year, Sitges debuts four initiatives aimed at highlighting its role as a rendezvous for the film industry and Catalan talent. On the one hand, Sitges Pitchbox has been curated as a tool for the Festival and the Filmarket Hub platform, offering opportunities for possible feature length genre productions and for which 170 projects have been signed up. On the other, the Industry Meeting Point – installed at Hotel Melià – will pool together actions and initiatives by Catalan professionals and industrialists. At the same time, the Blood Window Red Carpet this year brings a panel of actors and actresses with an international trajectory, selected by a jury from the Catalan Film Academy, the Catalan Association of Professional Actors and Directors of Catalonia and industry professionals. And finally, this year’s Festival debuts the Sitges Campus 2015, a forum on thrillers in collaboration with Catalan universities and film schools.

For the third year running, Sitges will be holding the ESCAC Week, a programme of activities and screenings where hundreds of film school students participate as part of the Festival. This experience will allow them to appreciate this artistic and industry-related event from the inside, as accredited Sitges Festivalgoers, providing insight into international fantasy genre filmmaking and participation in Spain’s professional network.

Catalan Productions
Once again the 48th Sitges – International Fantastic Film Festival of Catalonia is committed to Catalan productions and is a gateway for the latest national genre projects. Six Catalan productions are included in the Sitges 2015 line-up: The Corpse of Ana Fritz, Vulcania, Segon Origen (Second Origin), Summer Camp, La Novia and Sacramento.

So that’s what’s going to be happing in just one week’s time and we’ll be there to report all the shenanigans so keep watching this space. Now, without further a do, take a look at the guest list that can best be described as behemothic: