There’s nothing like a classic revenge story to get your motor running, especially when it’s about the down-trodden delivering the comeuppance of those that once burned them. Hell, you can simply type in the words ‘revenge horror’ into your search bar to see how far reaching and influential the genre has become. From humble roots to full-blown blockbusters, it’s quite a time to get your vengeance and Sisters of Sorrow plans to use every weapon at their disposal. Going beyond the standard, the new work from BOOM! Studios not only delivers sweet, sweet revenge but explores the volatile nature of relationships, the police who protect us, and the deeply flawed justice system for the marginalised classes. In issue #2, we get a bit more of the ultra-violence that made the opening issue so successful, but this time, we get to see it in full nun pageantry!

Despite its alluring cover of a gun-toting nun going all vaya con dios on any drug dealers that dare to sell to the local children, the main characters are, unfortunately, not nuns. But that doesn’t mean they can’t delve out some serious pain like a nun. The first issue introduces us to four women who live in a domestic abuse shelter. With each one struggling with their issues, they are suddenly brought together when a fellow resident is shot by an ex-husband and said ex-husband is shot by one of the women. With two dead bodies on their hands, the troupe sets it up as a murder-suicide to allude the cops, but they also learn a very serious lesson as well. The only way to really get away from their abusers is to kill them. The strong powerhouse, Dominique, takes advantage of their new found knowledge and aims to gun down her ex-husband, especially after he’s cleared of manslaughter charges against their child.

Issue #2 follows the successful (and bloody) murder of Dominique’s ex-husband, but now she’s on the watch list of every cop in the city, especially because her victim was a cop himself. While she fights the law, a second member of the group, Greta, decides she wants in on some of the murdering action. Her target: her violent and VERY rich ex-boyfriend, a man who changed her life after he pushed her down the stairs and killed her pregnancy. Of course, a man so rich has got to have a number of alarms and fail-safes in place in his house to protect himself from his enemies, so what’s a woman to do? Get her friends to help, of course! Oh, and pick up some stellar nun outfits to boot.

While Sisters of Sorrow sounds like it might be a screwy, gore-gasm of a comic that dives heavily into early exploitation, it thankfully avoids most of the genre stereotypes. (Aside from the gore, it’s pretty gory.) It’s actually a pretty serious revenge work that handles real issues that victims of domestic violence have to deal with. The strength it takes to leave an abuser and the fear that they might track you down, the realities of dealing with police procedure, and the complete and utter hopelessness when the victim does stand up to the abuser in court and nothing is done. How many victims have fantasised about killing their abusers? How quick it would be and how good (or unfulfilling) it would be to put a bullet between the eyes? Sisters of Sorrow doesn’t glamorise the genre and put the women in skimpy outfits with a machete in one hand and a cigar in the other, it has each of them use their knowledge of their exes and each women’s unique set of skills to completely destroy their aggressors. Needless to say, it’s a very satisfying read. If you’re a fan of Korean vengeance flicks, this might be for you. 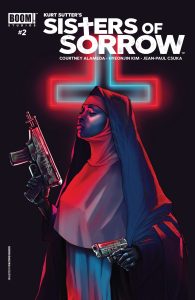 Like any good comic, it’s not just the story that sells it, but the art behind it. Artist Hyeonjin Kim has a wonderfully stylized art form that mixes modern American comic illustration with high-art action manga. The unique line work is perfect for the bursts of action and her understanding of angles makes the talking head panels flow smoothly through the work. With her talents and the writers Kurt Sutter and Courtney Alameda’s words, Sisters of Sorrow is well on its way to being a mini-series classic.