Sisters of the Plague Bringing Southern Gothic Home in March

Looking for some alternative romantic viewing for Valentine’s Day? Well, you could do worse than New Orleans-set spooker Sisters of the Plague, which hits DVD and VOD on February 14th, courtesy of BrinkVision. 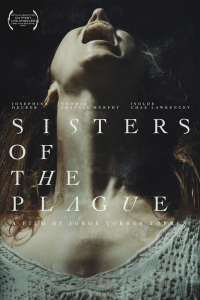 The film received positive reviews following festival screenings in 2015 and 2016, with praise going to its leads, Josephine Decker and Isolde Chae-Lawrence, who play Jo and Kate, a couple living in the French Quarter of The Big Easy. Jo (Decker) leads corny haunted house tours around the city, but genuinely unexplainable events begin to occur after her father moves into the house she shares with her girlfriend, Kate (Chae-Lawrence). Jo seeks the help of a medium, and it soon becomes clear that the threat is something far beyond their control.

Finding horror within a fracturing relationship, Sisters of the Plague is reportedly an intensely creepy experience. It was directed by acclaimed documentary filmmaker Jorge Torres-Torres, whose fantastical, surrealist 2013 doc Shadow Zombie also presented a unique look at love and death in Louisiana. Torres-Torres also co-wrote the film alongside Jason Banker (Felt).

Check out this brief but intriguing trailer.