Sink Into New Under the Silver Lake Poster

David Robert Mitchell made some serious waves in the horror world and beyond with his acclaimed modern genre classic It Follows. Four years on and his next directorial outing, which is primed for a June release, has just gotten this cool one-sheet. 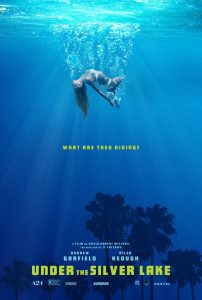 Like the poster itself, Under the Silver Lake sounds like it holds a secret or two. It stars Andrew Garfield as Sam, a man who becomes obsessed with the bizarre set of circumstances surrounding the murder of a billionaire mogul and the disappearance of a local girl.

“Sam (Andrew Garfield) is a disenchanted 33-year-old who discovers a mysterious woman, Sarah (Riley Keough), frolicking in his apartment’s swimming pool. When she vanishes, Sam embarks on a surreal quest across Los Angeles to decode the secret behind her disappearance, leading him into the murkiest depths of mystery, scandal, and conspiracy in the City of Angels.“

As well as Garfield and It Comes at Night’s Riley Keough, the film also stars Topher Grace and Sydney Sweeney (The Ward, The Handmaid’s Tale). Director Mitchell also wrote the script, and brought back Disasterpeace from It Follows to create the score.

Distributor A24 release the noir-esque crime thriller in New York and LA on June 22nd, with a nationwide expansion to follow closely behind.