Writer Simon Barrett (You’re Next, The Guest) makes his directorial debut with Seance—and this cool new poster teases that something spooky is afoot! 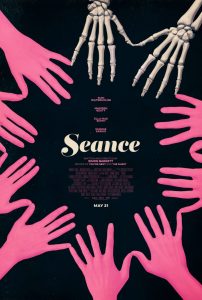 Produced by Dark Castle Entertainment, Seance follows Camille, the new girl at the prestigious Edelvine Academy for Girls. Soon after her arrival, six girls invite her to join them in a late-night ritual, calling forth the spirit of a dead former student who reportedly haunts their halls. But before morning, one of the girls is dead, leaving the others wondering what they may have awakened…

Suki Waterhouse (Pride and Prejudice and Zombies) stars in the film alongside Stephanie Sy (Nikola Tesla and the End of the World), Inanna Sarkis (The Left Right Game), Madisen Beaty (The Clovehitch Killer), Djouliet Amara (Tales from the Hood 3), and Ella-Rae Smith (Sweetheart). Adam Wingard served as a producer.

Seance releases in theatres, On Demand, and Digital on May 21st. You’ll also be able to catch it on Shudder later this year.