By 1943, the second wave of Universal monster flicks had seen comebacks for Frankenstein’s monster, the Invisible Man and the Mummy, and a new legend born in the form of the Wolf Man. Lon Chaney Jnr. had so far rocked the Jack Pierce make-up in three of these roles, but there was one more major character yet to be exhumed – Count Dracula. He hadn’t seen the light of the moon since his corpse was briefly glimpsed in 1936’s DRACULA’S DAUGHTER, so it was only natural, in terms of box-office business at least, that Chaney be called upon to don the musty cape for his return.

This one brings the Lord of the Undead to the Louisiana swamps under the devious alias of ‘Count Alucard’. Awaiting his arrival is one Kay Caldwell (Louise Allbriton), one of two daughters of a local plantation owner, who makes no secret of her morbid obsession with the occult. Having met Drac in Budapest, she’s been having secret assignations with him ever since, so far unbeknownst to boyfriend Frank (Robert Paige). But the dark designs of ‘Alucard’ become all too clear when Kay’s father dies mysteriously, leaving Kay the plantation, and she immediately ties the knot with the Count so he can start lording it up over all and sundry. But could it be that Kay herself actually has another hidden agenda?

The story outline of SON OF DRACULA was the work of German émigré screenwriter and science fiction author Curt Siodmak, who’d started writing for Universal with THE INVISIBLE MAN RETURNS (1940) and had since penned INVISIBLE AGENT (1942), THE WOLF MAN (1941) and FRANKENSTEIN MEETS THE WOLF MAN (1943) for the studio, along with the classic I WALKED WITH A ZOMBIE (1943) for RKO. But the reason that SON really lucks is that on this occasion Curt brought along his director brother, Robert Siodmak, who was soon to become A-list as one of the best and most prolific directors in the film noir genre. 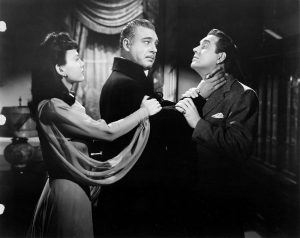 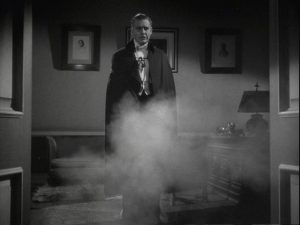 Among the fabulous moody atmospherics on offer is a continuous take pulling out from a reception at the Caldwell place to reveal Chaney’s Dracula lurking outside. There’s also a great sequence where Dracula’s coffin rises up from the swamp, smoke pouring out of it to become the Count himself, who proceeds to glide imperiously towards Kay and the viewer. This was the first film where we actually saw Dracula transform into mist or a bat on-screen and, for the time, these animation effects were state-of-the-art.

The general flavour of the film may be kitsch and unmistakeably ‘B’, but the performances are good enough to carry along the action. Louise Allbritton is perfectly cast in the role of Kay, and despite a long career in film and TV it remains undoubtedly her best known work. Robert Paige is suitably desperate as her spurned lover and, later, accomplice, and Evelyn Ankers, who also played alongside Chaney in THE WOLF MAN and THE GHOST OF FRANKENSTEIN (1942), provides a perfect counterpoint as Kay’s more ‘straight’ sister, Older actor Frank Craven eats up a hell of a lot of screen time as the concerned Dr. Brewster, forming a partnership with a cut-price Van Helsing in the form of Professor Lazlo (J. Edward Bromberg). 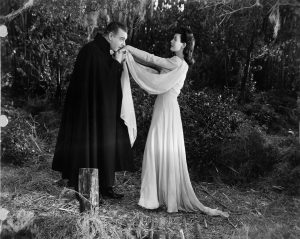 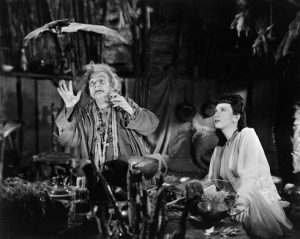 As for Chaney himself, he makes for a rather portly Dracula, it must be said, and his obvious American accent is more than a touch jarring since he’s supposed to be fresh over from Hungary. He’s clearly enjoying himself in the role though, even if it is just because he hasn’t had to spend eight hours in a make-up chair. However, we can’t help but imagine how much better the film might have been had it marked Bela Lugosi’s return to the character, which sadly wouldn’t be until ABBOTT AND COSTELLO MEET FRANKENSTEIN (1948). At that time Lugosi was busy playing the Count in all but name as ‘Armand Tesla’ in Columbia’s RETURN OF THE VAMPIRE (1943). 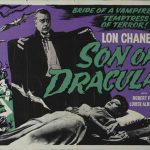 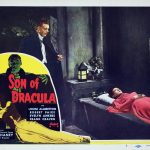 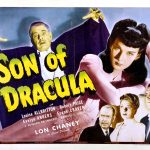 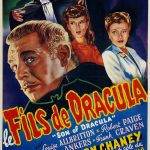 Like many of these, SON OF DRACULA constitutes a thing of flawed beauty, if marred by the racial stereotypes on display – an unfortunate sign of those times. Oh, and in case you’re wondering, yes, someone does indeed have to sit there with a piece of paper and a pencil to work out that ‘Alucard’ is Dracula backwards.