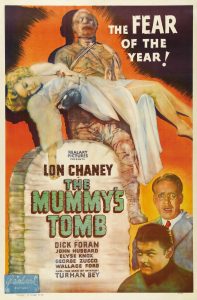 Despite being made somewhat on the cheap, THE MUMMY’S HAND (1940) had been a big hit for the players then calling themselves the “New Universal”, making a sequel as inevitable as a tomb desecrater’s death by mouldy strangulation. However, developments since the last film had seen the rise of a new horror star in Universal’s firmament, and THE MUMMY’S TOMB (1942) and two further sequels would find that actor donning the bandages in place of original ‘Kharis’ Tom Tyler. That actor was, of course, Lon Chaney Jr.

Born Creighton Tull Chaney and starting out his acting career under that name, he’d taken on his illustrious father’s moniker in the mid-thirties, eventually ending up under contract to Universal himself. His first role for the studio was the lead in 1941’s MAN-MADE MONSTER, but the one that would make him a bone fide horror star was, you guessed it, that very same year’s THE WOLF MAN. Eager to trade on the ‘brand’ that his name evoked, it was only natural that the studio would employ him in the service of another of their hot properties.

TOMB picks up thirty years after the events in the last film, although everything thing still looks decidedly 1940s from where I’m standing. In a chintzy sitting room, Steve Banning (Dick Foran again, in old age make-up and specs) regales his son John (John Hubbard) and John’s girlfriend Isobel (Elise Knox) with the tale of his encounter with Kharis, mostly related to the viewer via ten minutes of footage from MUMMY’S HAND. Bear in mind at this point that the entire film only clocks in at about an hour. We learn that Marta (Peggy Moran), a character we came to rather like in the last opus, died some years ago of non-Mummy related causes. Oh well. 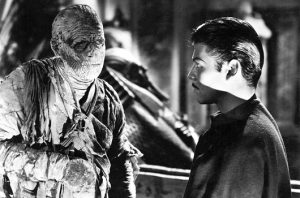 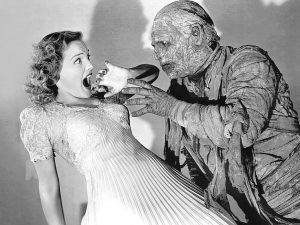 Meanwhile, back in Egypt, we find that the previous film’s villain, Andoheb (a brief return for George Zucco), has survived, and the Mummy’s looking pretty sharp too, despite being burnt to a crisp at the climax. The now-aged Andoheb passes on the mantle of High Priest to young Mehemet Bey (Turhan Bey) along with the command to avenge the desecration of Ananka’s tomb by our American infidels. Why he’s waited thirty years for this is unclear. Next thing you know, Mehemet and Kharis are on a slow boat Stateside, there to seek out Banning and destroy him and all of his line, bringing cloth-wrapped, mouldy terror to the streets of Mapleton, Massachusetts…

It’s no small amount of fun to see the Mummy taken out of his usual Egyptian milieu and shambling amok in Anytown, USA, even if we are well aware that this was simply to save a few bucks. The structure is almost that of a FRIDAY THE 13TH movie, with Kharis emerging from his imported sarcophagus at regular intervals to kill the interloper’s relatives and associates one by one, and as such we certainly get to see plenty of Mummy action. Steve Banning gets it fairly early, leaving son John to take his place as the hero, and Babe (Wallace Ford) also briefly returns, plus old-age make-up and minus the comic relief antics, only to get the old Mummy treatment soon afterwards.

Turhan Bey is no George Zucco, but being of Turkish origin is at least more convincing as an ‘Egyptian’. A good-looking young actor, Bey was often called upon to play ‘exotic’ (i.e. ‘foreign’) characters, subtitled the ‘Man of Mystery’ on some posters for this film, and nicknamed ‘The Turkish Delight’ by his not insubstantial cohort of female fans. Just like Zucco in the last one, Bey gets carried away and decides he wants Isobel for himself, to live with him for eternity. Well, I guess a guy doesn’t get to meet many lady-folk when brought up in a MUMMY’S TOMB. When he announces these intentions to Kharis, Chaney’s Mummy does an amusing double-take, as if to say “Seriously?” 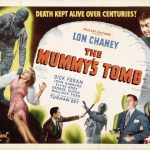 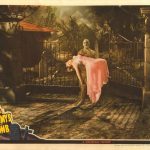 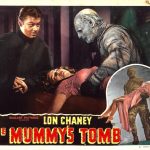 It’s well known that Chaney hated playing the Mummy. Not only did it mean long stretches in the Master Jack Pierce’s make-up chair, but it’s also plain to anyone that any big lug capable of following simple instructions would be able to pass muster in the role. He’s there for the marquee value of his name only. But, thin budget or no, Pierce’s make-up is as excellent as ever.

So, yes, a definite ‘B-movie’ and ‘programme filler’ if there ever was one. But that touch of Universal class ensures that it’s B-movie Gold. There are certainly worse ways to spend an hour. EastEnders Omnibus, anyone?