Welcome to SILVER SCREAM (see what we did there?), a brand new series here on the site where I’ll be digging into our horror heritage once or twice a month with some classic fright flicks from Universal Studios and other monochrome monster movie moguls of the day, both major and minor. 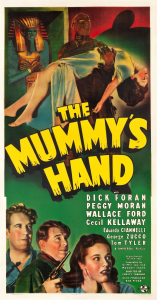 The thirties ‘Golden Age’ of early talking horror pictures may have screeched to a halt around 1936, but Universal’s issuing of a highly successful double-bill of DRACULA and FRANKENSTEIN (both 1931) in ’38 saw Karloff and Lugosi rise straight back to the top of the pile. Eager to capitalise on this and usher in a new wave of lucrative monster pics, the studio forged ahead with the big budget SON OF FRANKENSTEIN (1939) and didn’t look back until the well was dry. THE MUMMY (1932) had been another huge hit for the studio, and so was another obvious choice to bring back from the grave.

Today we might complain that Spider-Man gets rebooted far too often and far too soon, but Universal were already doing this nearly eighty years ago. Made just eight years after the original, THE MUMMY’S HAND (1940) hits the reset button with a brand new Mummy and a new set of characters, but on a much leaner budget. In the director’s chair was one Christy Cabanne, a name not as enshrined in movie history as the likes of James Whale or Tod Browning, but a dependable old hand at delivering low and medium budget fare, who’d once worked as an assistant to D.W. Griffith. 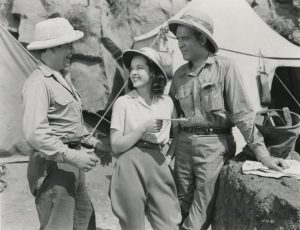 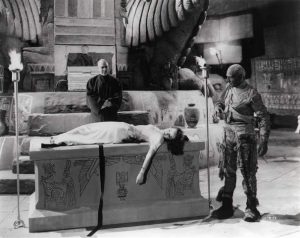 A dying High Priest of Karnack (Eduardo Cianelli) tells his successor, Andoheb (George Zucco), the story of our new Mummy: Kharis, here played by silent western veteran and future Captain Marvel Tom Tyler. Three thousand years previously, poor Kharis was mummified and buried alive for the crime of stealing tana leaves from the Temple of Isis in an effort to restore his lover, Princess Anankha, to the land of the living. Over the millennia, high priests have protected Anankha’s tomb by keeping Kharis in a state of suspended animation, dosing him with three tana leaves every full moon. If anyone ever violates the tomb, then the dose is to be upped to nine leaves to get the Mummy up on his feet and on a murderous rampage.

No sooner have we witnessed Andoheb’s inauguration than we are introduced to down-on-his-luck archaeologist Steve Banning (Dick Moran) and his comic relief pal Babe (Wallace Ford), who happen on an ancient jug in a Cairo market, decorated with hieroglyphics that point the way to the tomb in question. Turns out the local museum is run by our fiend Andoheb, who poo-poos the jug’s authenticity to throw them off the scent and denies them any funding for an expedition. Enter jolly magician Solvani (Cecil Kelloway), who agrees to stump up the cash as long as he can join them. Suspicious of the pair, Solvano’s daughter, Marta (Peggy Moran), also comes along to ensure there’s no funny business, and before you know it Andoheb is feeding Kharis that triple-dose of leaves… 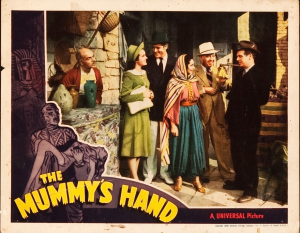 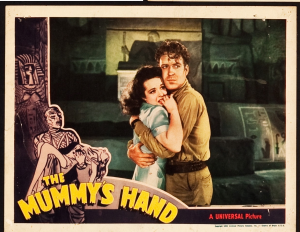 Boris Karloff’s ‘Imhotep’ may have had the luxury of a better film, but it was Kharis in this one and its sequels that set the stereotype for the Mummy that we’re all familiar with today. Karloff’s Mummy was only seen swathed in bandages for the opening sequence before assuming the living form of ‘Ardath Bey’ for a dark love story after the fashion of DRACULA. Our new Mummy remains that way and shuffles around attacking interlopers in the more straightforward monster movie routine. And, as Denis Gifford tells us in his classic ‘A Pictorial History of Horror Movies’, “There was a horrible truth in his crippled Kharis: once athletic, Tyler was in the grip of arthritis.” 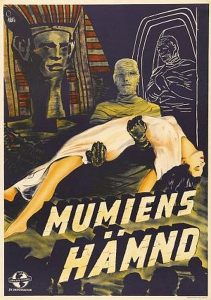 The lower budget is readily apparent to anyone who has seen the Karloff original: most of the Ancient Egypt flashback footage, the Cairo exteriors, and the desert shots were culled wholesale from the earlier film. The impressive temple set is carried over from the same year’s GREEN HELL. Aside from that, the whole thing has more of a Saturday morning serial feel (ask your granddad), and as such seems far less ‘essential’. However, like most of these it’s also irresistibly charming, a very pleasurable way to pass just over an hour. The characters are likeable, the tone mostly playful, and the scene where the Mummy awakes, his eyes black and hollow, still sends a chill down the spine. Clichéd? Of course it bloody well is. These guys were busy inventing all the cliches that we still see at work today.