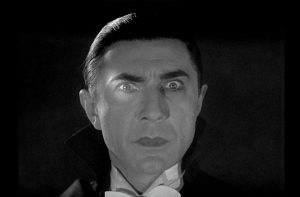 Here’s the one that started it all. Universal Pictures had been taking a keen interest in a certain stage play that had been playing to packed houses since its debut at London’s Little Theatre in 1927. Before that year was out, a slightly modified version was on Broadway, and a tour of the States followed, doing big business in all of the major cities. That play was of course “Dracula”, based on the 1897 novel by Bram Stoker, adapted for the stage by Hamilton Deane, and tweaked for its US version by John L. Balderstone. By the time 1930 was out, Universal had secured the film rights to both book and play, with an eye to it being the latest vehicle for one of their biggest stars, that great ‘Man of a Thousand Faces’, Lon Chaney, Snr.

However, although the actor’s director of choice, Tod Browning, was almost immediately attached to the project, Chaney’s tackling of the role was not to be. Chaney was diagnosed with throat cancer and died in that same year. The ‘Dracula’ that had been thrilling sold out crowds around the country, a Hungarian émigré born Béla Ferenc Dezső Blaskó – better known by his stage name of Bela Lugosi – was at first turned down by Universal chief Carl Leammle, Jnr in favour of American character actor John Wray. Wray ultimately failed to land the part and a further six well-known actors of the day (including Paul ‘SCARFACE’ Muni) were considered before a successful screen test, along with no small amount of lobbying, saw Lugosi win the role, joined by his Broadway Van Helsing, Edward Van Sloan. 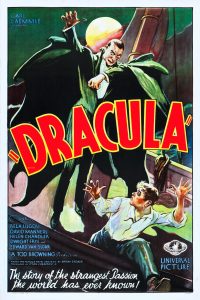 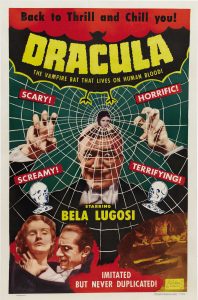 It is with the resultant DRACULA (1931) that horror truly ‘arrived’ as a cinematic genre. Released on February 12th of that year, it was a massive hit with audiences and critics alike, and would be re-released time and again for decades to come. As a result of its huge success, James Whale’s FRANKENSTEIN was made and released in the same year, not only ushering in the ‘Golden Age’ of Universal Horror but also putting the studio on track to becoming the vast corporate entity that we know today, albeit after a protracted touch-and-go period throughout the Great Depression. To this day, DRACULA remains one of the most famous horror movies ever made, and approximations of Lugosi’s appearance in the role continue to stare out at us through everything from Halloween costumes and Lego Minifigures to Scooby-Doo cartoons and cereal boxes. Dracula is a cultural icon as instantly recognisable as Sherlock Holmes or Superman.

But how does the film stand up today? DRACULA’S opening third remains magnificent. The scenes in Transylvania, charting the hapless Renfield’s (Dwight Frye) journey to and arrival at the Count’s castle are beautifully realised, despite some silly shots of armadillos (!) and a wasp crawling out of a mini-coffin. Universal ploughed some decent money into Charles D. Hall’s Castle Dracula and Carfax Abbey sets and all this can be seen up on screen, rendered all the more beautiful by German cinematographer Karl Freund’s sublimely eerie cinematography. In one of the most famous movie scenes of all time, Dracula bids Renfield welcome from the top of his giant staircase, backed by the now-famous 18-foot spider web, and we are all immediately under the master vampire’s spell. Prior to this, we see the Count rise from his coffin in the crypt to glare out at us through the fourth wall, while his brides glide ethereally around in the dust and cobwebs. And who that has seen the film can ever forget the chilling maniacal laughter of the now-insane Renfield as he emerges from the hull of the ‘Vesta’? 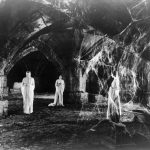 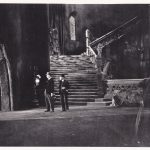 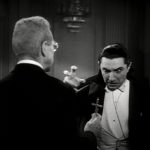 Sadly, the film fails to sustain this wonderful Gothic mood for its remainder. Not long after the Count arrives in London, the film settles into being a talky, stagy, drawing room affair. Of course, these problems are to a large degree due to the fact that DRACULA is an early ‘talkie’, a still experimental form working out the logistics of recording audible dialogue on set, but this is compounded by Browning’s insistence on sticking largely to the stage play, resulting in the most exciting action tending to take place offscreen. Although the action picks up in the climactic scene at Carfax Abbey , the Lord of the Vampires is despatched quite literally with a whimper rather than a bang. However, the film still holds the attention thanks to the mesmerising presence of Lugosi in the role he is synonymous with. Here he IS Dracula himself, not seeming like an actor at all but rather a supernatural creature caught on camera. 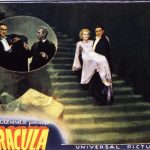 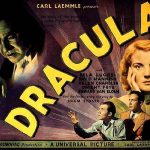 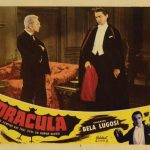 Less than a decade earlier had seen the production of F.W. Murnau’s silent classic NOSFERATU (1922), an unauthorised adaptation of Stoker’s novel. Despite their changing of the Count’s name to Orlok (played magnificently by Max Schreck), Stoker’s estate wasn’t fooled one bit and the subsequent litigation saw to it that the film wasn’t widely seen until many years later. While NOSFERATU is undoubtedly the superior interpretation of the Stoker novel, its suppression means that the release of Browning’s DRACULA more truly represents the ‘birth’ of the horror film as we know it. For this and for its incredible opening – introducing all the iconography we associate with the genre – what would likely be a solid ‘3’ is here upgraded to a four. For the hours of pleasure brought to us by the thousands of horror movies since, we owe Browning and Lugosi this at the very least.