Sid Haig sadly passed away earlier this year, but he will live forever on film. And one of his final performances was in the movie Hannukkah, a slasher of the old-school variety that is coming to theatres and VHS later this month. 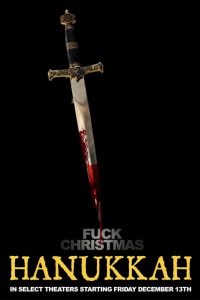 In the film, a group of Jewish young adults are getting ready for the holidays when the Festival of Lights takes a frightful turn. Turning to a wise Rabbi for advice, they soon realise they’re being targeted for violating Judaic law. The cast also includes legends like PJ Soles (Halloween, Carrie), Charles Fleisher (A Nightmare on Elm Street), Caroline Williams (The Texas Chainsaw Massacre 2), and the late Dick Miller (Gremlins).

Released by Invincible Entertainment and My Way Pictures, Hannukah will have a limited theatrical release starting December 13th. It won’t hit Blu-ray and VOD until February 11th, 2020—but if you like your mediums like you like your slashers, you can go old-school and get a VHS copy on December 20th. The tapes will be available in black, yellow, and blue, with 100 copies being made in each colour—and all will come in a nostalgic clamshell case.