Shut In Changes its Name to Intruders 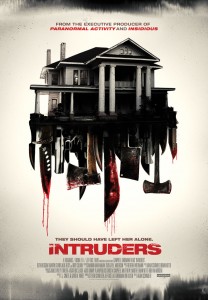 The claustrophobic thriller Shut In from director Adam Schindler has had a name change and it’s now called Intruders. This title change seems like a strange decision, because ‘Shut In’ focuses on the victim and the idea of being trapped, but ‘Intruders’ is a little generic and loses much of the film’s focus on inescapability. With the plot centring on a woman with agoraphobia, you’d think that ‘Shut In’ would make more sense. Alas, what do we know about film titles?

Synopsis:
Beth Riesgraf stars as Anna, a woman who suffers from agoraphobia so crippling that when a trio of criminals breaks into her house, she cannot bring herself to flee. But what the intruders don’t realise is that agoraphobia is not her only psychosis.

Intruders comes from writers T.J. Cimfel and David White who were behind the V/H/S: Viral segment ‘Vicious Circles’ and Schindler will be making his feature directing debut. Check out the poster for the film, which kindly reminds us that Intruders comes from the producers of Insidious and Paranormal Activity – isn’t everything nowadays?

Intruders will be released in the USA on 19th February 2016.