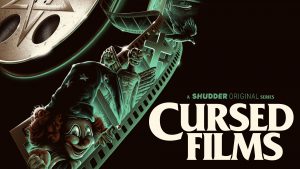 The Shudder original docu-series Cursed Films will be back for a second season. The series, which is written, directed, and executive produced by Jay Cheel, explores the facts and legends around iconic films and franchises whose casts and crews have been struck by misfortune and tragedy.

Through conversations with cast and crew members who witnessed the tragedies firsthand and have born the weight of them, along with interviews with writers, scholars, and experts, season one explored the truth behind five supposedly “cursed” films: The Omen, Poltergeist, The Exorcist, The Crow, and Twilight Zone: The Movie. The new season will explore an entirely new group of films, whose titles have not yet been revealed.

“Filming season one of Cursed Films was an amazing experience, so I’m thrilled to have the chance to interview a new group of talented filmmakers and film critics while exploring the stories behind five more legendarily ill-fated film productions,” Cheel said in a statement. “This time around we’ll be heading outside of North America for a few episodes, which will not only widen the scope of the series but offer an exciting collection of stories connected to a diverse group of movies.”

The second season of Cursed Films is now in production and is set to premiere in 2021.