Gareth Evans has teased the arrival of a full trailer for Apostle with a sneaky peak at a short, sweet and sinister teaser. Check it out here on his Instagram page. We’re definitely excited to see more, because – intriguing as they are – these few seconds just aren’t enough. 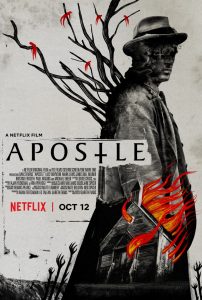 Although it’s not The Raid 3, we’re excited to see more from The Raid/Raid 2 director, who also directed the Safe Haven segment of V/H/S 2.