Shudder has released a new trailer and poster for Shook, an upcoming horror movie written and directed by Jennifer Harrington (Housekeeping​). 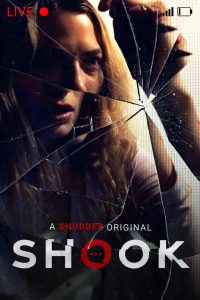 In the film, Mia, a social media star, becomes the target of an online terror campaign. To prevent people she cares about from getting murdered, she must solve a series of tests. But is it real? Or is it just a game at her expense?​

A Shudder Original, Shook hits the horror streaming platform on February 18th. Check out the trailer below.