Shit a Brick; it’s a New Image from It

Courtesy of Empire, a new image from It has surfaced and it shows Pennywise in a similar sewer-y position to Tim Curry in the 1990 version. It’s not quite as creepy as the shot with Tim Curry, but it never was going to be. Bill Skarsgard’s Pennywise is drenched in shadows in this version of the iconic moment and even though it does generate fear, I’d have liked to have seen him lean out of the dark a little further. I guess we’ll have to wait for the full-length film for that!

The image succeeds at getting us excited about Andy Muschietti’s (Mama) take on Stephen King’s classic tale of terror and that’s all it needs to do. When speaking about the film, Muschietti said to Empire: 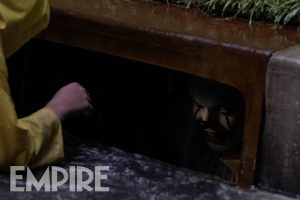 “There’s supposed to be a less-is-more thing in horror. It’s like you’re not really meant to show the monster. But Pennywise is different. With Pennywise, it’s like, ‘This is the monster, I’m showing it to you… and you’re going to shit a brick.”