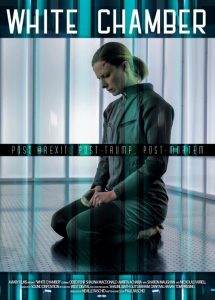 Having crawled through caves in The Descent and more recently, been confined to a hospital room in Nails, Shauna MacDonald has yet more confined terror in store in White Chamber, which is showing at the Brussels International Fantastic Film Festival.

Below is the grim new teaser for the claustrophobic British sci-fi horror, which takes place in a near-future UK and sees MacDonald trapped in a blank cell by a mysterious, torture-happy captor.

“Civil war rages. A woman wakes up in a blindingly white cuboid cell. Using its sophisticated functionality, her captor tortures her for information; information she claims not to have – or does she?”