Sharknado 4 is on its way! 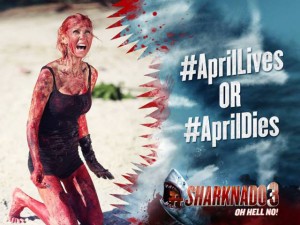 OH HELL YES! It’s not even been 48 hours since Sharknado 3: Oh Hell No was premiered in the US and already the latest instalment of the popular SyFy franchise has taken the twittersphere by storm!

After breaking two billion Twitter impressions yesterday, Syfy and The Asylum have officially announced that they have already greenlit Sharknado 4. So after such a thrilling and enjoyable third instalment fans have already started to speculate where the next Sharknado will hit.

“I want to do international,” director Anthony C. Ferrante told Variety of the next movie’s location.“There are still U.S. cities that I want to destroy. But it’s less about the cities, and it’s more about what are we going to do with [co-stars] Ian [Ziering] and Tara, and what genres do we want to play with?”

Does this mean we might see the next sharknado hit our side of the pond? Time will surely tell. In the meantime, after the shocking finale of Sharknado 3, fans have been given the choice to decide the fate of April (Tara Reid) by voting #AprilLives or #AprilDies on Twitter or by visiting Sharknado.Syfy.com.